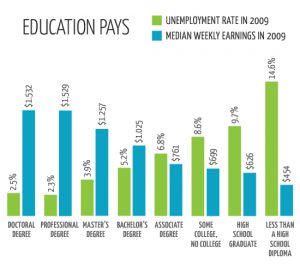 Higher education has long been recognized as the doorway to opportunity. A college degree represents far more than proof of extended academic inquiry, which carries, of course, its own rewards. We connect undergraduate and graduate education to highly coveted outcomes like better careers, more money, and increased job satisfaction. College graduates even enjoy better health. Sure, college entails a steep investment that increases every year, but that investment pays off tremendously generation after generation.

Yet, even though American higher education attracts the best and brightest from all over the world, a rising number of citizens doubt its value. According to Pew Research Center, a majority of Republicans and Republican-leaning independents (58%) now say that colleges and universities have a negative effect on the country. Evidence, of course, proves otherwise.

Colleges themselves drive regional prosperity. For example, Rochester’s largest employer is no longer one of the giants of old like Xerox or Kodak but rather the University of Rochester. But these institutes of higher learning provide more than jobs; colleges and universities create educated individuals that coalesce into successful communities. The high correlation between regional economic growth and higher educational attainment has been established time and time again.

The individual and societal benefits of higher education are too numerous and evident to doubt. Rather than questioning the value of learning, one might question those who rail against it.

Thanks for pointing out that getting a college education will increase your future job satisfaction. My daughter will be graduating high school soon, and she’s trying to decide if she wants to go to college or not. I want her to feel fulfilled and happy with whatever job she chooses, so I’ll definitely talk with her about that great benefit of a college education.