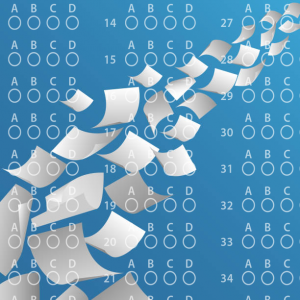 Imagine you were driving down the road and saw what seemed to be really important paperwork regarding your most fervent academic aspirations. This may sound like a wild hypothetical, but, too often, truth is stranger than fiction…

Raina Porras and her mom were in the car when they saw papers littering the street last week.

Looking closer, Porras, a junior at El Paso High School, saw what seemed like Scantron bubbles filled in across the pages. Her mom joked that the papers were her PSAT scores because she’d just taken the exam the day before.

Her mom was right.

Apparently, the answer sheets for the SAT exams that students took at El Paso High School on October 27 were lost in transit after being submitted to UPS. According to the El Paso Independent School District, staffers recovered all but 55 of the answer documents.

What can be done for students whose answer sheets were lost? Not much, unfortunately. According to reports, the district is working with the College Board to determine a remedy and also offered to pay for free ACTs. But the only remedy possible is an opportunity to take the test again, which hardly seems like restitution and can still be calamitous in the case of an imminent application deadline.

We cover all manner of Test Day Nightmares, most of which happen on the actual day of the test and can thus be managed, to some extent, by test takers prepared to advocate for their rights. Problems after test day, however, are completely out of a test taker’s hands and sadly occur more often than we expect. The only real remedy to unfortunate instances like the El Paso UPS glitch is to test early enough that your applications are not imperiled by forces beyond your control.

Previous articleGetting-into-College Fair in Perinton This Week!Next article What is a "Hook" in College Admissions?