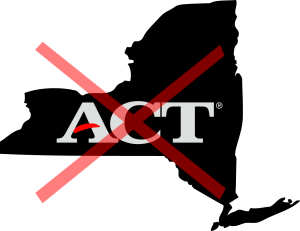 Just when you thought being a New Yorker represented the pinnacle of human achievement, you learn that the other 49 states enjoy privileges denied the Empire State. We’re not just talking about tax policy here. Of all the states in the Union, New York is the only one with no ACT test centers in February or July.

Considering that the ACT is administered in New York every April, June, September, October, and December, you might not lament the loss of yet another test date. In practice, however, many juniors see February as an ideal time to test due to their academic and extracurricular schedules. So why are we New Yorkers locked into the International Test Date calendar while the rest of the United States, Canada, and even Guam get to test during the shortest month?

Back in 1979, New York State amended its education law to mandate strict disclosure of standardized test material. This legislation, known as the Truth-in-Testing Law, initially required that all test-makers had to make copies of every administered test available to test takers. Popular tests governed by this law included not just the SAT and ACT, but also graduate admissions exams like the LSAT, MCAT, GRE, and GMAT. At last, testing organizations were forced to release exam questions with their correct answers.

The implications of the Truth-in-Testing Law have been nothing less than transformative for test takers, to say nothing of professionals in the test prep industry. However, the legislation posed a bevy of logistical and design problems for test makers. These organizations argued that the law would make development of valid tests more challenging and costly. Clearly, they survived.

The College Board somehow wrangled an exemption that allowed them to release tests from only some test dates. Today, students may avail themselves of Question-and-Answer Service, receiving copies of the SAT questions they took along with their reported answers, for SAT exams administered in January, October, and May. Yet, the SAT is offered seven times a year in every state including New York.

ACT, Inc., on the other hand, doesn’t appear to have received the same accommodations affored its more established rival. Students taking the ACT in December, April, and June may also receive a test booklet and list of answers through a Test Information Release. But for some reason, the organization cannot or will not offer a New York February or July test date because of the Truth-in-Testing Law.

Will New York test takers ever enjoy the full slate of ACT administrations offered other states? Bill A9884-2013 was introduced in the NY Assembly in May 2014 to level the playing field for the ACT and New York’s deprived high schoolers. Unfortunately, no action has yet been taken on that bill or any other solution.

Until a change is made, New York state high school students must suffer through the winter without a single shot at the ACT or, alternately, make a run for the border and test in another state. But note that this disadvantage only affects students on National Standard Time or National Extended Time. Students whose testing accommodations include Special Testing at school can knock out an ACT in time for Valentine’s Day!

Previous articleWhich States Use The SAT or ACT For State Testing?Next article To QAS Or Not To QAS