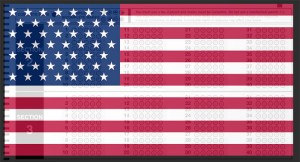 “We had reached the conclusion that there was, in fact, too much testing in 11th grade. We thought it was just a tremendous amount of pressure concentrated in a single year.” — Connecticut Governor Dannel P. Malloy

The No Child Left Behind Act of 2001 changed the face of American education by tying federal school funding to assessments based on specific math and reading standards. Specifically, every public high school must administer a statewide standardized test annually to all students, so that every high school student is tested at least once during grades 10-12. However, federal regulations dictate neither a national achievement standard nor a national assessment test. Instead, each individual state develops its own standards and tests.

However, a confluence of factors have convinced a growing number of educators and state officials of several relevant facts:

Interestingly, both the SAT and ACT offer the highest quality standardized tests designed specifically to assess, among other things, math and reading ability in high school students. Both test makers have peerless experience in designing, administering, and scoring this kind of test. Best of all, most college-bound high schoolers would be taking the SAT or ACT anyway. So why not implement one of these tests as a statewide NCLB assessment?

In fact, more and more states are doing just that. According to Education Week, nearly half of states have contracted with the College Board or ACT, Inc. for some form of wide-scale administration in high school. In those states that still use their own assessments, plenty of individual school districts have committed to widescale SAT or ACT testing.

ACT
Many states administer the ACT to all public high school juniors, while others use the ACT in conjunction with other tests to assess academic achievement and college readiness. ACT, Inc. reports that, since 2007, students in more than 30 states have earned college-reportable scores taking the ACT in their own classrooms. The following states use the ACT and/or ACT Aspire in some capacity:

Many others integrate the PreACT, QualityCore, WorkKeys, or National Career Readiness Certificate into statewide assessment.

SAT
Michigan and Illinois used to administer the ACT as a statewide assessment, but have recently committed to use the revised SAT for state testing. More states may be joining them; while the SAT may currently lag behind in the number of states requiring high school students to take it, the College Board is committed to catching up. As of early 2018, the following states will use the SAT in some capacity:


Last but not least, certain states like Alaska , Ohio, Tennessee, and Idaho require high school students to take the SAT, the ACT, or one of the other ACT assessments, but these states don’t necessarily tie graduation to scores or pay for testing.

Certain states are moving closer to adopting either or both of the college entrance exams in place of current assessments. Look for news, perhaps as early as this year, out of Arizona, Georgia, Florida, North Dakota, Oklahoma, and Oregon.

Moves made by both ACT and the College Board indicate that securing these state contracts are among their top priorities. In fact, the ways the ACT and SAT are being revised these days suggests that their use as statewide assessments may soon supersede their traditional roles as college entrance exams. Look carefully at the list of states above… if your home state isn’t on it yet, it may be there soon.

NOTE: This post was originally published in October 2015 and most recently updated in January 2018.

Previous articleTwo Ways PSAT Scores are MisleadingNext article Why Are There No February ACT Test Centers in New York?