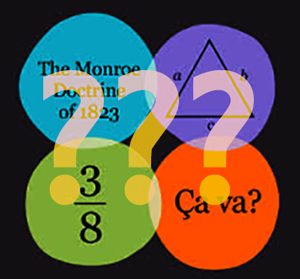 If there’s one thing that’s certain in business, it’s uncertainty. Stephen Covey’s observation rings true, but he could just as easily have been talking about college admissions. Ambiguity, confusion, and fragmented information rule the earlier parts of application process, while opacity and anxiety attend its end. Applicants often don’t know where they’ll be matriculating until mere months before high school graduation, and perhaps even those decisions won’t be as binding in September 2020 as they have in years past.

The role of college entrance exams lacks the bedrock certitude of admissions cycles past as some colleges flirt with sometimes ill-conceived ways to de-emphasize SAT and ACT scores. Nonetheless, those tests will continue to carry tremendous weight for the foreseeable future. The same cannot be said for SAT Subject Tests.

We know so much about SAT Subject Tests, from how many subjects are covered to which ones matter most to the best time to take these tests. The painful uncertainty lies in the critical fact we don’t always know: are SAT Subject Tests necessary at all?

Why is the necessity of Subject Tests even in question? While colleges and universities have moved to universal adoption of both SAT and ACT scores, they’ve gradually abandoned the requirement or recommendation of Subject Tests. Unfortunately, the majority does not rule an exercise as individual as college admissions. As long as at least some well-known schools include a factor in their application processes, that factor will command outsize attention. We see that with the written portion of the SAT and ACT, and we see it with SAT Subject Tests as well.

More and more schools are dropping their Subject Test requirements, but some resources cannot keep up with the changes. For example, College Board maintains a database of Institutions Using SAT Subject Tests. However, in checking the accuracy of this list, I started with Fordham University, a school I know well, and quickly ascertained that this institution no longer uses Subject Tests. No wonder College Board suggests you should contact colleges directly for the most accurate and up-to-date Subject Test policies.

Keeping that sage advice in mind, you may consider the following list more of an indication rather than an ironclad guarantee that a school requires or recommends–functionally the same thing for admissions purposes–Subject Tests. For that matter, some say that even when highly competitive schools designate Subject Tests as optional, they still practically require them. So consider this information simply a way to help focus your research:

Note that some of these schools require or recommend tests from all applicants, while others restrict the requirement to those pursuing certain majors or programs. Unfortunately, while the majors in question generally involve engineering or science, sometimes even humanities majors need these tests. In addition, at least one school still holds to the antiquated notion that Subject Tests are recommended for those who submit SAT but not ACT scores.

With such inconsistent interest in Subject Tests, College Board should eventually modify the exams or abandon them entirely. Either option would be preferable to the current climate of uncertainty. Until that time, be diligent in your research and keep your options open by taking Subject Tests in either May or June, depending on your academic and testing schedule.