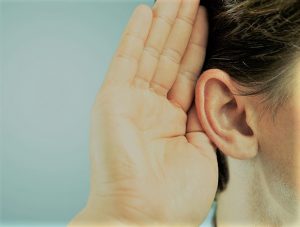 When discussing strategies for multiple-choice grammar questions recently–something totally normal people do all the time, I’m sure–I found myself surprised by how much one of my most respected friends in education and I differed on how useful “listening” for an error is. Continued debate proved inconclusive, so we brought the question to our big brain colleagues in Test Prep Tribe: “How many of you advocate that students “use their ears” to identify grammar errors in ACT English or SAT Writing and Language?” Unsurprisingly, the test prep community at large is split, at least as far as blanket statements about any particular approach go. However, the lively discussion around the issue helped formulate some nuanced rules about trusting your ear when solving grammar questions:

In English, what sounds wrong is wrong… usually.
Standardized exams like the SAT and ACT tend to test grammar through underlined portions of larger texts that may or may not require revision. Although these tests are taken in silence, students should absolutely listen with their internal ears as they read the text. Quite often, obvious errors will leap out because they sound wrong. For example, problems with parallel structure, phrasal verbs, and idiomatic expressions generally sound awkward when they need to be repaired, after which they sound natural or harmonious.

In other cases, such as verb tense, using your ear unlocks that magical part of your brain that unconsciously conjugates while you speak, assuming you’ve developed fluency in a language. A test taker doesn’t need to be able to identify the tense of a verb to use it correctly.

Only a trained ear can be trusted.
The massive assumption underlying the value of listening for errors is that a student knows what proper academic or professional English should sound like. Anyone who works in K-12 or higher education could assure you of how rare that level of discernment has become in modern teens. Simply put, very few high schoolers are expected to read full works of fiction or non-fiction, let alone generate their own examples of effective written communication. Inadequate exposure to the right kind of language makes the ear an unreliable narrator of grammatical accuracy.

Also worth noting is how the grammar sections of the SAT and ACT present the truest tests of pure vocabulary knowledge. In some items, test takers cannot rely on contextual clues but must often differentiate between many outwardly similar, relatively common words. Choices that are wrong in questions like these will definitely sound wrong, but only to those with sufficient breadth and depth of exposure to the language. The solution, of course, is simple though not easy: read every day.

For real accuracy in grammar, the ‘eyes’ have it.
Listening for errors may help on some test items, but many others require fundamental understanding of grammar mechanics. For example, subject-verb agreement is usually tested in such a way that incorrect construction often sounds correct in sentences where the verb agrees with the noun closest to it, which itself differs with the subject in number. The error sounds right when wrong, and vice versa.

Other grammatical errors cannot be heard at all, particularly in the realm of punctuation. Does a colon sound differently from a semicolon? Mastery of marks depends on a firm understanding of the rules along with the ability to distinguish independent and dependent clauses. Your ear might tell you whether a clause stands on its own, but you still have to know how marks connect phrases and clauses or set off non-essential information.

The old Russian maxim, “Trust, but verify,” popularized in the U.S. by Ronald Reagan, more often refers to politics or personal relationships than academia. However, when matters of grammar and usage are at stake, a ear for errors combined with a strong grasp of rules and structure are powerful allies. If you want to be able to trust your ear on test day, train it to be trustworthy.