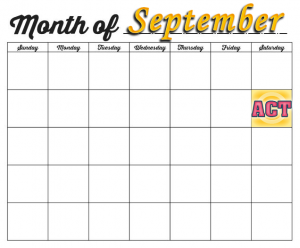 The traditional testing paradigm has high school juniors struggling to fit SATs and ACTs in at the end of the academic year, just as Spring Break, APs, finals, prom, and creeping summeritis set in. Some traditions deserve to be consigned to the trash heap of history along with bull fighting and jello salad. Instead, embrace a new way of looking at testing: juniors should test as early in the academic year as makes sense based on their goals and activities. For many juniors, that philosophy reveals September as the perfect time to take the ACT.

Seniors, of course, are already lining up in droves for the September ACT. The traditionalists who took the June tests–at least the ones who didn’t plan for the July test date–have been waiting for months for another crack at the test. Testing in September presents plenty of upside with minimal risk for 12th graders. September scores come in with plenty of time for Early Action or Early Decision applications or simply another shot at a better superscore.

What makes September such an ideal time to take the ACT? Timing, in this as in all things, is everything. The test date typically falls the weekend or two after Labor Day, which means school has barely begun for many students. Even the most sadistic teachers find piling on excessive homework a challenge so early in the academic year. Very few extracurricular activities have launched as well, with the obvious exception of fall sports. Thus, test takers are able to approach the September ACT with minimal outside stress.

Even better, the months preceding this test date are those blissful summer months, during which most teens enjoy a much lighter and less academic schedule. Summer may be the very best time of year to prepare for the ACT, which makes the first ACT of the school year the best one to take.

Obviously some students should steer clear of September testing in favor of later dates. Fall athletes, especially those who may be recruited by colleges for their athletic acumen, probably won’t be in position to bring the correct focus to the test in the midst of a hectic season. Students who were too busy to prep over the summer or who wish to get some Algebra 2 under their metaphorical belts before testing may be wise to delay. However, every other high schooler entering junior or senior year who could devote time to summer study should prioritize prepping, registering, and sitting for the September ACT. Imagine how much easier school will be this year when you’ve conquered the ACT before autumn even begins!