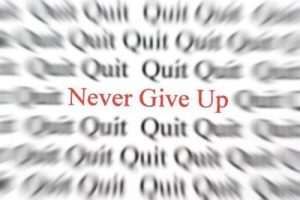 Success in the face of great challenges and competition does not come easy. No less an authority than Napoleon Hill asserts that effort only fully releases its reward after a person refuses to quit. The theme of persistence as an essential ingredient of true accomplishment is central to his famous works, particularly Think and Grow Rich, one of the best-selling self-help books of all time.

What happens, in Hill’s perspective, when persistence is lacking?

One thing we all know, if one does not possess persistence, one does not achieve noteworthy success in any calling.

When defeat comes, accept it as a signal that your plans are not sound, rebuild those plans, and set sail once more toward your coveted goal.

The majority of men meet with failure because of their lack of persistence in creating new plans to take the place of those which fail.

Persistence played such a fundamental role in Hill’s world view that he attributed failure to success as a probable lack of this essential element. After enumerating eight elements of persistence, he turned his attention to the signs that someone lacked the necessary resolve:

1. Failure to recognize and to clearly define exactly what one wants.

2. Procrastination, with or without cause (Usually backed up with a formidable array of alibis and excuses)

4. Indecision, the habit of “passing the buck” on all occasions, instead of facing issues squarely

5. The habit of relying upon alibis instead of creating definite plans for the solution of problems

6. Self-satisfaction. There is but little remedy for this affliction, and no hope for those who suffer from it

7. Indifference, usually reflected in one’s readiness to compromise on all occasions, rather than meet opposition and fight it

8. The habit of blaming others for one’s mistakes, and accepting unfavorable circumstances as being unavoidable

9. WEAKNESS OF DESIRE, due to neglect in the choice of MOTIVES that impel action

10. Willingness, even eagerness, to quit at the first sign of defeat

11. Lack of ORGANIZED PLANS, placed in writing where they may be analyzed

12. The habit of neglecting to move on ideas, or to grasp opportunity when it presents itself

13. WISHING instead of WILLING

14. The habit of compromising… General absence of ambition to be, to do, and to own

15. Searching for all the short-cuts

16. FEAR OF CRITICISM, failure to create plans and to put them into action, because of what other people will think, do, or say.

How do you know if lack of persistence is to blame for your lack of results? Students who fail to earn the grades or test scores they aspire to usually benefit from a thorough Test Preparation Checklist when unpacking disappointing results. But the next step should be one recommended by Napoleon Hill himself, an honest analysis of the strength of your persistence:

“Take inventory of yourself, and determine in what particular, if any, you are lacking in this essential quality. Measure yourself courageously, point by point, and see how many of the eight factors of persistence you lack. The analysis may lead to discoveries that will give you a new grip on yourself.”

Previous articleCongratulations to Our 2021 Scholarship Winner!Next article The Case for the September ACT