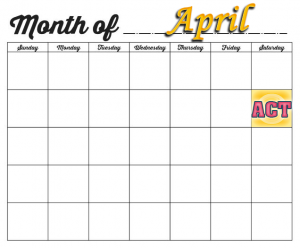 Spring, according to the great Robin Williams, is nature’s way of saying, “Let’s party!” The gray of winter gradually gives way to green shoots, blue skies, and a rainbow of blossoms celebrating new life. Then summer comes, and everyone complains about the heat!

But spring means more to the average high school student than just flowers and fancy. Every class that began in August or September is barreling towards its inevitable end, with all the culminating tests and assignments that come with it. Winter sports and activities finally finish up, just in time for a new slate of spring sports and activities. Students struggle to finish at least as strong as they started, even as they become distracted by daydreams about Spring Break and prom.

Where, in the midst of all this excitement and activity, do the SAT and ACT fit in?

Typically, only 11th graders, along with a handful of precocious 10th graders, really worry about the college entrance exams in spring. Most juniors probably don’t worry as much as they should, imagining that a late spring SAT or ACT simply serves as the prelude to a summer of study and a better score come fall. What these students rarely realize is how challenging the end of junior year and beginning of senior year becomes for those seeking entrance to competitive colleges.

The case for the April ACT–one of the most popular test dates of the year–becomes clear when you consider the whirlwind of activity that follows:

Mid-April, when the ACT traditionally falls, usually represents a moment, however brief, of respite for high schoolers from the more frenetic pace to follow. Even better, the two months leading up to that date tend to be light in terms of testing or competitions. Both points make April an excellent time to take the ACT.

The very best time to take the SAT and/or ACT is, as I say every chance I get, as early in junior year as a student can plan and prepare for, allowing two to three months for effective preparation and practice testing. April may be the last chance during the academic year a student has to take the ACT with enough energy and focus to actually excel on it. If you earn your best ACT score in April, you don’t have to take it again, which means you can focus on all those other commitments coming down the pike, which in turn makes for easier Finals, a happier summer, and a more effective fall. Considering the obvious long-term benefits, the case for the April ACT is extremely strong.