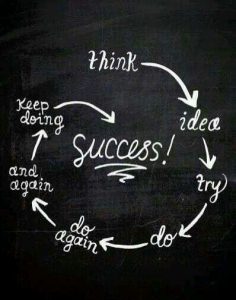 When I think back to my college days, I wonder how professors expected us to learn anything. Some of those courses entailed hour-long lectures to hundreds of students at a time with minimal opportunity to encode or implement information. No wonder tests were basically based on the textbooks!

Obviously, not every class–then or now–centers primarily on passive absorption of content. In fact, such ineffective models have mostly given way to more activity-oriented lesson plans. Effective teaching usually harnesses what is called the production effect. Basically, producing something at the immediate moment of learning facilitates understanding and enhances retention.

At the most basic level, the production effect can be just a verbal trick, the superior retention of material read aloud relative to material read silently during an encoding episode. As you learn new information, repeat it to learn it.

However, in learning as in so many other areas of life, actions often speak louder than words. Other types of activity also leverage the production effect. The act of taking notes, for example, has been tied to greater recall of information. In fact, the more kinesthetic nature of handwriting over typing leads to certain cognitive benefits.

The best way, in my experience as an educator, to leverage the production effect in combination with the equally powerful testing effect is to immediately apply new information to problems similar to those featured on future tests. For example, when learning punctuation rules for a standardized test, you don’t want to learn a long list of rules all at once. Instead, as you learn each rule, use it to solve a related test question in order to accelerate memory formation and strengthen encoding.

Educational reformer John Dewey taught us long ago that learning should be relevant and practical, not just passive and theoretical. Yet, far too often, individual students default to static forms of learning, hoping that knowledge can be poured into a willing but complacent vessel. If only that was true! Instead, the production effect clarifies that we learn by doing.