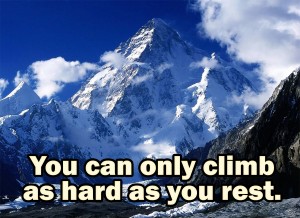 “You can only climb as hard as you rest.” Jared Leto shared that kernel of rock climbing wisdom to explain his prodigious productivity. Even a moment’s thought assures us that this concept makes perfect sense.

Now consider the average high school student, so buried under so many academic, extracurricular, and social commitments that he can’t even get a good night’s sleep. This avalanche of activities might seem like the only path to success, but overwork all too often impedes real achievement. Not only do people, particularly teens, require lots of sleep for optimal performance, but even breaks make a difference.

Margaret L. Schlichting and Alison R. Preston of The University of Texas at Austin found that reflection boosts learning. Their research subjects who used time between learning tasks to reflect on what they had learned previously scored better on tests pertaining to what they learned later, especially where small threads of information between the two tasks overlapped.

“We’ve shown for the first time that how the brain processes information during rest can improve future learning,” says Preston. “We think replaying memories during rest makes those earlier memories stronger, not just impacting the original content, but impacting the memories to come.”

The study’s findings suggest that taking the time to mentally review what we’ve learned strengthens and consolidates understanding, which helps boost future learning. The most important implication of this research should be obvious: instead of marathon school days and late night cram sessions, we need sufficient breaks to process what we learn.

For those of us resigned to the grind, breaks don’t just happen. Planning strategic downtime might seem like an attempt to force something that should come naturally, but a scheduled nap is as refreshing as a spontaneous one. So go ahead and treat yourself to regular breaks… you can only learn as hard as you rest!

Previous articleYes, SAT and ACT Scores are Highly PredictiveNext article The Hard Work Puts You Where Good Luck Can Find You