When Aristotle asserted, “To avoid criticism say nothing, do nothing, be nothing,” he probably didn’t realize that some folks would turn his aphorism into a winning PR strategy. Yet, we’ve all been so focused on future changes to the SAT that we haven’t noticed the ACT transforming gradually right under our eyes! ACT has avoided controversy by saying as little as possible. Shrewd, right? 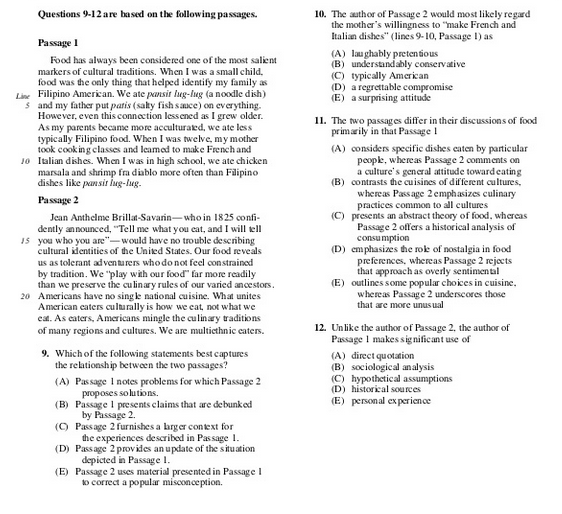 WHAT ARE PAIRED PASSAGES?
Paired passages are simply two passages paired together for testing purposes. Typically, these passages cover the same basic topic, but approach this topic from different angles. Note that the two passages don’t necessarily contradict or contrast; in some instances, the authors agree on substantial points.

Paired passages can cover the full range of subject matter from humanities to social sciences to natural sciences. They are typically nonfiction, but either or both passages can be excerpts of fictional work.

HOW ARE PAIRED PASSAGES BEST HANDLED?
Students should approach paired passages the same way they should approach every passage on the SAT and ACT: read for thesis. Students should read each passage with the intention of understanding the author’s topic, thesis, and perspective. Knowledge of these three critical components not only facilitates earning big points on test questions based on each passage, but supports understanding of the relationship between the two passages. Such insight is necessary to accurately answer the questions that address both passages together.

When answering questions on paired passages, students should take special care not to confuse the main points of each. Sometimes, jotting some quick notes can clarify which author says what. In any case, students should always refer back to the passages to research and confirm answers to every question.

1. Each paired passage is typically shorter than a comparable single passage.
2. The fact that paired passages usually address the same topic can help students understand each one separately.

With these advantages in mind and considering that paired passages require the same general reading strategies every other passage demands, students should be able to excel on paired passages on the SAT and ACT, even if they don’t expect them!