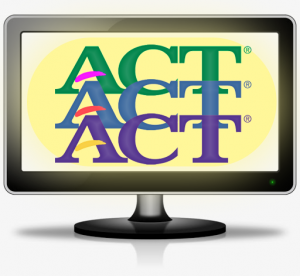 I recently had the good fortune of being invited to take an official ACT in my own home by computer. As a lifelong student of standardized testing, I’m never going to turn down the opportunity to learn something new while challenging my skills. And now that I’ve taken the test, the educator in me demands that I share my insights on this new twist on an old test. What did I learn by taking the ACT on computer?

1. I still got it! While performing at a high level obviously matters to me, I have nothing but professional pride on the line. Elite performance can be difficult to achieve without a real incentive, and I already have my college degree, thank you. Apparently, though, I can still turn it on when needed 😉

2. Testing on a computer takes longer. I spoke at length with ACT Senior Director of Research Krista Mattern several months ago about what her team learned in field testing a digital ACT. Their observation that timing didn’t vary substantially from paper-and-pencil to computer didn’t match up with anecdotal reports, research into reading, or simple common sense. Putting my assumptions to the test confirmed my suspicions, but not exactly as expected. The English and Science sections required the same approximate time I usually take, but Reading and Math took longer. The challenges of solving test math problems on the screen surprised me most, as that was one digital section considered most comparable to its paper-and-pencil analogue.

3. Selecting answers is easier. We’ve all suffered at one time or another from errors in misgridding–entering the answer for one question on the line for another–or double bubbles on standardized test answer sheets. Bubbling in answers is a skill that that expert test takers practice diligently. Online tests, on the other hand, don’t have answer sheets. Even better, the digital ACT I took presented one question at a time, eliminating any possibility of misgridding. Nice!

4. The digital format is not exactly like the paper version. Current digital versions of the ACT mirror the traditional hard copy model in all the ways you’d expect from numbers of passages and questions to content tested to time allotted. Certain minor modifications stand out, though. For example, portions of text on the English section are highlighted rather than underlined. The same technology is used on the Reading section to eliminate the need for line numbers. I didn’t detect any changes that impaired performance, but noticing punctuation at the end of a highlighted text fragment is just as tough as on underlined portions.

All in all, the digital ACT felt just like the original in terms of content and format. However, taking the test on a computer adds a degree of friction that demands extra effort and time. Even my expert time management skills were put to the test on some sections, especially Math. ACT may be (as predicted) backing off section retesting this fall, but online ACT testing will begin at some schools, with in-home ACT and SAT exams almost certain to arrive in early 2021. With hope, further testing will encourage versions of the ACT that suit the digital environment. In any event, test takers should always practice in the format they will encounter on test day.

Previous articleTalking Test Optional and Twice Exceptional AdmissionsNext article College in the UK this Fall? It's Not Too Late!