For those in the know, SAT Math has never really been about the math. Of course, the SAT has always tested math concepts ranging from basic arithmetic to higher level algebra and arithmetic. But the math section of the SAT really challenges problem solving ability, creativity, and logic. Thus, students with excellent grades in math classes at school often earn merely average SAT Math scores because they lack the conceptual understanding to solve tricky test problems.

The redesigned SAT maintains that commitment to prioritizing math manipulation over calculation, but also shuffles the content portfolio to emphasize linear equations and trigonometry at the expense of basic geometry. The College Board claims the redesigned SAT will require a stronger command of fewer, more important topics, but the list of topics across four functional areas tested still seems pretty deep:

In terms of content, the redesigned SAT covers most of the advanced topic previously encountered only on the ACT. Structurally, the SAT retains its inimitable grid-in question type, the Student-Produced Response. In fact, students will be “treated” to twelve rather than the current ten grid-ins on the new test.

But the biggest change to SAT Math has nothing to do with the math itself or even the question types. Students now have to contend with a no-calculator portion. The College Board claims that the no-calculator portion allows the redesigned test to assess fluencies valued by postsecondary instructors by featuring conceptual questions for which a calculator will not be helpful. However, my experience suggests that most high school students are dependent on their calculators for even the most basic operations. This single aspect of the SAT, more than anything else, may send students screaming to the ACT. 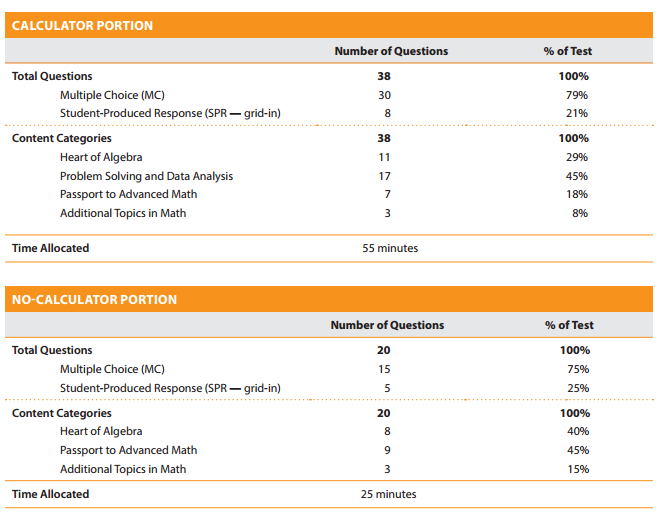 (From Test Specifications for the Redesigned SAT)

WHAT’S THE SAME?
SAT Math still tests a wide range of math topics in a way that emphasizes problem solving and conceptual understanding.

WHAT’S NEW?
The new SAT Math Test adds more advanced topics to the pool of tested content and also links to other sections through history and science cross-test scores. However, no change is more momentous than the addition of a no-calculator portion.

WHAT’S THE DIFFERENCE?
The new SAT has adopted so many features of the ACT that the two are more easily compared and contrasted than ever. If one of the biggest differences between the two is that one allows calculator use on every math question and the other doesn’t, which would you expect the typical high schooler to gravitate towards?