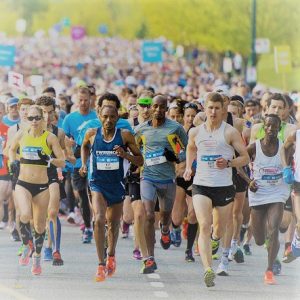 Autumn means marathon season, not to mention stampedes of school children at cross-country trails all across the United States. Distance running may be grueling, but the sport appears to grow more popular every year. Interestingly, few if any sports demand such a singular focus on intrinsic motivation, mental training, and success measured not by the performance of others but against personal bests. In this, distance running looks a lot like test preparation.

PACING
Athletes in most team sports get the benefit of coaches pushing them to move faster or slower as each moment requires, but testers and runners don’t have that luxury. In both races and timed tests, officials may work the clock, but every individual sets his or her own pace. Runner John Bingham understood where the responsibility for keeping time fell: “Once you’re at the starting line, you’re there by yourself. No one can run a single step for you. No one can jump in and help you. No one but you can make the decisions about what to do to keep going. It’s all up to you.” A big part of test preparation involves mastery of pacing and time management.

SUCCESS
In 2017, 518,731 runners completed the full 26.2 miles in 828 marathons across the United States and Canada. Assuming separate medals for men and women, those races produced only 1,636 winners, little more than 0.3% of the field. Obviously, most of those runners weren’t competing against the top racers, but against themselves. Benchmarking against personal bests drives test prep as well. After all, just a fraction of 1% of test takers earn perfect SAT or ACT scores. Instead, students need to measure success according to certain score points set by target colleges or individual improvement. That intrinsic motivation can be incredibly powerful. As Olympic gold medalist (in field, not track) Al Oerter said, “I didn’t set out to beat the world; I just set out to do my absolute best.”

Put all of this together, and the similarities between test prep and distance running make perfect sense. Prepare for your big tests the way racers prepare for marathons. Like them, you’ll not only be happy when the ordeal is over, but you’ll also be thrilled with your results!