A few days ago, my eyes fell on the lead news column, a piece about a terrible attack in Paris, in the New York Times, one of this country’s most prestigious and professional newspapers: 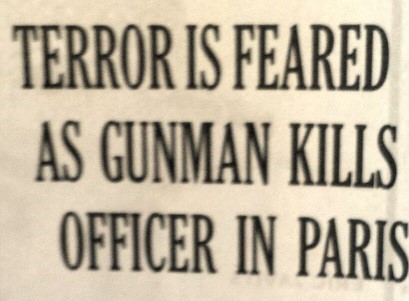 Here, on the front page of a paper of record whose famous motto is “All the News That’s Fit to Print,” can be found a phrase that would fail both the English and Writing sections of the SAT and ACT exams. The writing sections of both tests look for clear and concise wording; the job of the headline writer is to be concise to the extreme, but this often comes at the cost of clarity.

We have here an example of tautology, ‘a needless repetition of an idea, statement, or word’ according to Merriam-Webster.

Terror, in that same dictionary, is defined as a state of intense fear.

To state that “Terror is Feared” is to belabor the obvious.

Presumably, the headline writer, who is trained in The New York Times Manual of Style and Usage, knows this well, and intended, instead, to say, “Terror is Presumed.” The writer probably was constrained by the fact that he or she needed to use a certain number of characters at a certain font size over a certain number of lines.

This is the least of the worst. Newspaper headlines often say the ‘darndest’ things:

“Mexico governor says Chihuahua too weak to fight cartels.” (Small-breed dogs should be a good match for El Chapo,’Shorty.’)

“Brain is more active than thought.” (Thought is done by something else, perhaps the kidneys.)

“Pets are a child’s best friend, not their siblings.” (I always thought my dog was my sibling!)

(An online search yields numerous examples. These headline fails are courtesy of Bad Headlines. Comments are the author’s.)

Be sure to say exactly what you mean to say, and hold the writing of others to the same standard. Don’t trip over double entendres, malapropisms, pleonasms, and similar linguistic stumbling blocks on these exams!

Dr. Norbert Weinberg, an educator with decades of experience and success, is the founder of The Starting Edge, LLC, which is dedicated to delivering educational skills young adults need for college success. The Starting Edge is the exclusive provider of Chariot Learning SAT & ACT programs for lucky students in and around Beverly Hills, Westwood, and Hollywood.