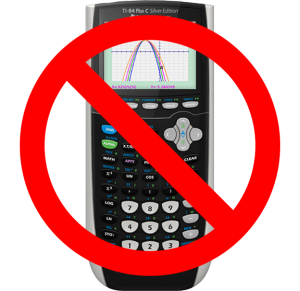 Very few people enjoy a story that begins with, “Back in my day…” That said, back in my day, we were not permitted to use calculators on the SAT. Instead, we had to perform all calculations (gasp) by hand. Didn’t think this was going to be a horror story, did you?

Life for test takers in the 21st century became just a bit easier when both the College Board and ACT, Inc. opened the doors to calculator use on at least some math questions. Sure, you can’t outsource figuring on the No-Calculator Math section of the SAT or the Science section of the ACT, but generally, your calculator will be there for you when you need it.

Except when it is not.

No discussion of test day horror stories would be complete without mentioning the myriad victims of calculator malfunction. Sometimes your device glitches, and sometimes it just dies. Either way, an already challenging math section increases exponentially in difficulty.

If your calculator fails during the SAT or ACT, you only have two options, neither of them optimal:

1. Continue to test without your calculator.
2. Cancel your entire test score.

Since both of these options are wretched, your best bet for success on test day lies in protecting against calculator failue in the first place. Obviously, make sure your device is fully charged, since you will not be able to plug it in at the test center. If your calculator takes batteries, make sure they are fresh and pack extras. While you’re thinking of contingencies, you may even want to pack a back-up calculator… cell phones don’t count. I’ve met plenty of students who complain during practice about how glitchy their calculators are, but don’t plan for the same problems during the official test.

If you don’t already know this, not a single math question on either the SAT or ACT requires a calculator. In fact, some problems are written specifically to trap students with sloppy calculator technique. But if your peace of mind on test day depends on the safety blanket of a smoothly operating calculator, have a plan for when things go wrong.