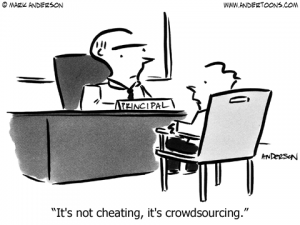 As surely as a new school year brings holidays and seasonal events, the same SAT and ACT test dates we’ve always known appear with comforting certainty. Students will take the SAT in early September, the SAT in early October, then the mid-October PSAT, then the ACT again, and so on and so on. Test dates may shift around from time to time, but once etched on the calendar, they are locked in (weather permitting, of course). The College Board has never cancelled a U.S. administration of the SAT. But recent events may strain even the clockwork consistency of our nation’s oldest testmaker.

Earlier this month, Reuters reported that a person with access to SAT material in development provided the news organization with hundreds of confidential test questions and answers. Reuters has not published any of this test material, but did confirm its authenticity with the College Board, who, through an attorney, said publishing any of the items would have a dire impact, “destroying their value, rendering them unusable, and inflicting other injuries on the College Board and test takers.”

This begs the question of whether the College Board could ever use the compromised questions in an official exam, or even trust the security of other test material. The leaked SAT material included approximately 160 Math problems and 21 Reading passages constituting approximately 250 questions. The College Board has confirmed that they are taking the stolen test content off the SAT administration schedule while an investigation is under way. But does the College Board have enough high quality, normed, screened, and tested material to create valid exams without drawing on the tainted questions?

The specter of cheating has haunted both the College Board and ACT, Inc. over the last several years. However, most of the high profile issues have occurred overseas in Asian nations from China to South Korea. In fact, widespread allegations of cheating in South Korea have been so dire over the years that the College Board cancelled the administration of the May 2013 SAT and Subject Tests. Time has only worsened the test security situation in that part of the world; ACT recently cancelled the June tests at 56 test centers in South Korea and Hong Kong because of a breach of the testing materials.

In their official response to the Reuters article, the College Board clarified that the stolen content has not been administered to students. They go on to say that “no students have or will be impacted by this theft.” While one part of that statement may be true, the rest may be wishful thinking. The test makers have established that they are willing to cancel exams rather than risk administering compromised tests. Considering how shoddy College Board security has become in the face of rising security threats, a nationwide SAT cancellation may not be far off.