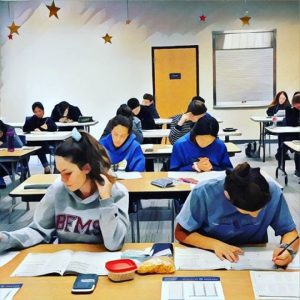 The current paradigm of SAT and ACT testing in the state of New York generally sees high schoolers testing at high schools, with the vast majority of students engaged in Saturday testing. Students in many other states benefit from free school day administrations, but the SAT and/or ACT take the place of traditional state assessment tests in those states. While NYC has piloted the use of standardized admissions tests for assessment purposes, we do not seem to be anywhere close to replacing the Regents.

This does not, however, eliminate the opportunity for a high school to administer the SAT or ACT in its own classrooms during the school day. In fact, both College Board and ACT have created paths that allow schools to serve as school day test centers for their own students. The question, of course, is, “Why bother?”

Who exactly benefits from SAT and ACT school day testing? Obviously, the test makers do, which is why they promote these options so strenuously. Students in general benefit from school day testing as well, though the calculus must balance the advantages of free, convenient testing in a familiar environment against the loss of a half- or full-day of schooling. While this alone might not be persuasive, the hidden advantage of school day testing definitely tips the scale for many administrators.

I recently interviewed Larry Mandernach, a school counselor at Valley High School in West Des Moines, Iowa, about the benefits of school day testing. Larry was referred to me as someone who transitioned from reluctant to enthusiastic about devoting a school day to the ACT, even though the practice came with some serious hassles. Who did he see as the primary beneficiaries of this practice? Disadvantaged students.

As Larry described the situation, district data analysts noticed that disadvantaged students weren’t testing at the same rate as other members of the student body, even though Valley HS was a test center for every ACT date. Further digging revealed that many of these students had jobs or childcare commitments during the weekend, while others simply couldn’t make it to school when school buses weren’t running. Offering the ACT during the school day provided access that didn’t previously exist, with the upshot being an unprecedented 98% testing rate for juniors. Even better, Larry described how simply taking an official ACT changed students’ perceptions of their prospects for college education, which itself is still a game changer.

Expanding access to admissions testing may be the responsibility of a nation, but the hard work falls to individual communities. The SAT and ACT are not only admissions tests but also assessments of college readiness. School day testing entails a variety of complications, but the benefits are both widely distributed and concentrated among those who need them the most. Counselors and administrators who are open to the idea should definitely listen to my full interview with Larry Mandernach about the benefits of school day testing. The current deadline to register for ACT school day testing falls in mid-August, so you may want to act quickly for the coming school year.

Previous articleWhy September is Awesome for TestingNext article My Prep Class is Over. Now What?