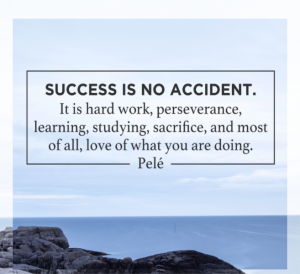 Few things take the wind out of a student’s sails faster than seeing someone they consider beneath them–in a strictly academic sense, of course–score much higher on an important test. The pain increases exponentially when high stakes tests are involved. I’ve seen the bad sides of plenty of good high schoolers when their classmates’ test scores come up. Yet, this uncharitable mix of jealousy and self-loathing usually misses a fundamental point about effort and achievement that Ava at Bookbear Express explains clearly:

Here’s what I know: if someone’s much better than you at something, they probably try much harder. You probably underestimate how much harder they try. I’m not saying that talent isn’t a meaningful differentiator, because it certainly is, but I think people generally underestimate how effort needs to be poured into talent in order to develop it. So much of getting good at anything is just pure labor: figuring out how to try and then offering up the hours.

More often than not, the student who scores well on a big test or standardized exam started putting in the work years before test day. Some teens score in the 99th percentile on the SAT or ACT on their very first try, sometimes without any prep at all. But these are the kids who have been reading all their lives, the ones who leveraged curiosity and persistence to attack learning the way athletes attack sports or creatives attack art.

Effort obviously doesn’t guarantee achievement, but the two walk hand in hand. So, if someone scores better than you, take that as a challenge rather than an insult.

Often, the arrogance that incites people to insult those who outperform them stems from painful insecurity. When you feel the urge to cut someone else down to make yourself feel better, try a different tactic. Be humble enough to really look at those who have arrived where you are still trying to go. Consider what they did to become ready, and recognize how hard they had to work at something to excel at it. Then you’ll be ready to put in the work yourself.