While nothing in the 21st century college application process approaches conventional levels of transparency, the rise of test optional admissions has added a whole new level of ambiguity and opacity to an already stressful process. Nothing has changed, of course, when applying to colleges that are open-admit or select the majority of applicants. The real drama occurs at the selective and highly selective schools. Not only is a smaller percentage of applicants than ever selected at some of these schools–lower than 4% at certain institutions–but the blurring of qualifications has added entirely new levels of confusion, even for experts.

Colleges universally adopted test optional admissions policies during the pandemic, in part because a handful of national SAT and ACT test dates and a flood of local test center administrations were cancelled. Test optional admissions also served to lower anxiety during a time when both applicants and the schools themselves were panicked about COVID-college. While I’ve always been critical about eliminating standards in higher ed applications, the general public became enamored with rhetoric about how removing objective data somehow produced fairer outcomes. However, feelings among applicants and their parents about test optional admissions have become more mixed as people have had time to consider its implications.

How do colleges feel about test optional admissions?

On the one hand, colleges LOVE test optional policies for one critical reason: they increase enrollment during a time when national demographic changes are leading to a decrease in overall college applicants. From a business perspective, test optional admissions has been a massive benefit to colleges and will not be going away anytime soon.

On the other hand, colleges also love data, particularly the kind that speak to college readiness and success rates. According to the National Student Clearinghouse, the national six-year college completion rate is only 62.2 percent, so clearly a substantial number of students who begin college do not finish, even after six years. Many academic, economic, and social factors influence college graduation rate, and some of the best measurements of college readiness come from SAT & ACT scores. Plus, test scores have always influenced college rankings, even if those algorithms are being revised to account for current admissions policies.

Hence, we have an admissions climate where applicants need to read between the lines and parse every statement carefully when deciding whether to submit test scores or not:

No, of course you don’t need to submit test scores at most colleges and universities.

Yes, you should absolutely submit scores if your test scores meet or exceed the 75th percentile of scores for last year’s freshman.

No, you won’t be penalized for not submitting scores.

Yes, you may have a higher chance of getting in if you submit the right scores.

Initial analysis suggested that students who submitted appropriate scores were accepted at rates that varied from 20% more to at least 130% more. As more information has come out, the advantage of competitive tests scores has only increased at many well-known schools:

Obviously, every college considers a different calculus, one that may vary based on desired program. For example, consider how many fewer students are accepted into Pitt’s nursing program than its general School of Arts and Sciences: 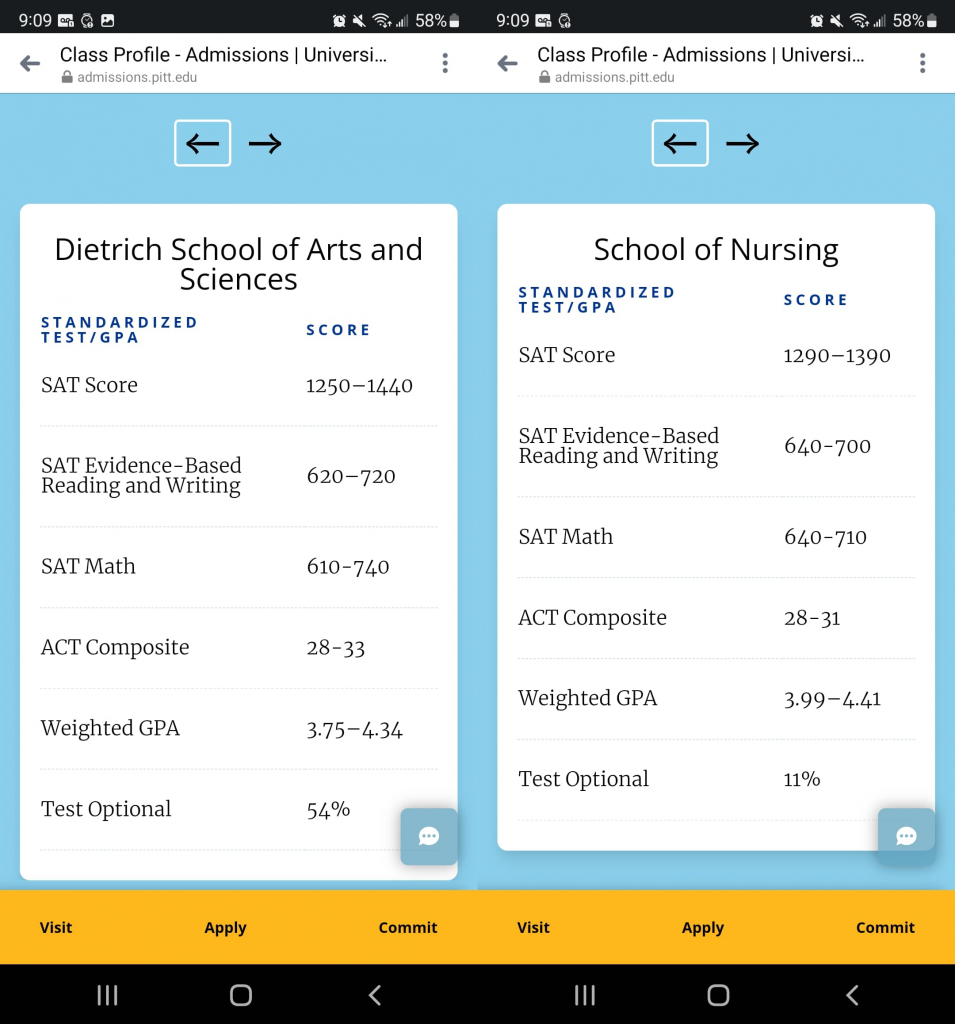 What should current college applicants do? According to US News & World Report, college admissions experts encourage almost every student to take the SAT or ACT at least once, barring significant access barriers or text anxiety. I’ll add to this advice that applicants should remember that, for highly selective colleges, no aspect of an application is truly optional.