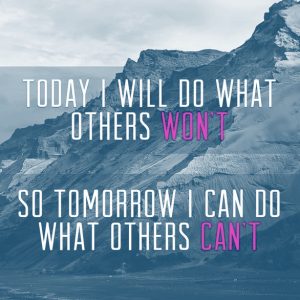 Success–particularly massive success over incredible obstacles–is understandably difficult to achieve in any field. If you accept the wisdom of the bell curve, you see that any sufficiently large group of people ranked in any complex skill like fencing or juggling will naturally huddle within one standard deviation of the mean with both highest and lowest performers charting an increasingly sloping path to either elite performance or utter uselessness. True success eludes those not fully dedicated to earning it.

This lesson plays out time and again in business, which is why an insight first shared in 1940 still resonates today. That is when insurance professional Albert E. N. Gray identified the common denominator of success in a memorable speech at the annual convention of the National Association of Life Underwriters. He may have been speaking about selling insurance but his words should hit home with anyone seeking success in any field or endeavor:

…like most of us. I have been brought up on the popular belief that the secret of success is hard work, but I had seen so many people work hard without succeeding and so many people succeed without working hard that I had become convinced that hard work was not the real secret even though in most cases it might be one of the requirements.

And so I set out on a voyage of discovery which carried me through biographies and autobiographies and all sorts of dissertations on success and the lives of successful individuals until I finally reached the point at which I realized that the secret I was trying to discover lay not only in what individuals did, but also in what made them do it.

But this common denominator of success is so big, so powerful, and so vitally important to your future and mine that I’m not going to make a speech about it. I’m just going to “lay it on the line” in words of one syllable, so simple that everyone can understand them.

The common denominator of success – secret of success of every individual who has ever been successful – lies in the fact that he or she formed the habit of doing things that failures don’t like to do.

Describing less successful individuals as failures is pretty harsh, but Gray was setting up a contrast as he further explained what those things failures don’t like to do included:

“The things that failures don’t like to do are the very things that you and I and other human beings, including successful people, naturally don’t like to do. In other words, we’ve got to realize right from the start that success is something which is achieved by the minority of people, and is therefore unnatural and not to be achieved by following our natural likes and dislikes nor by being guided by our natural preferences and prejudices…

Perhaps you have been discouraged by a feeling that you were born subject to certain dislikes peculiar to you, with which the successful agents in our business are not afflicted. Perhaps you have wondered why it is that our biggest producers seem to like to do the things that you don’t like to do.

They don’t! And I think this is the most encouraging statement I have ever offered…

Basically, success comes from doing the things you don’t want to do in order to succeed in the ways you want to succeed. Looking for massive success in tests, sports, performance, or business? Reject what Gray describes as “pleasing methods” in order to nail down those very pleasing results!