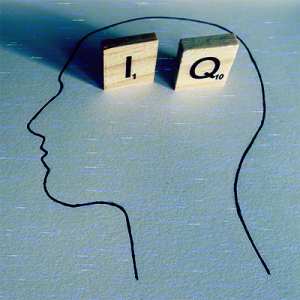 For as long as standardized exams like the SAT and ACT have been part of the college admissions process–a long time, indeed–they’ve been mistaken for conventional intelligence tests. This misconception makes sense. After all, the SAT and ACT are standardized tests, and intelligence appears to play a major role in success on these exams. That does not mean, however, that they are the same.

As ineffable and elusive as intelligence seems to be, tests are our only tools to measure and quantify it. In fact, a functional definition of IQ is simply “a total score derived from several standardized tests designed to assess intelligence.” Classic intelligence tests like the Wechsler scales for adults and children have to find ways to separate evaluations of learning ability from the testing of of what subjects have learned. Thus, IQ is not measured by how much math, science, history, or literature a person knows, but instead by how test takers respond to a battery of verbal, quantitative, visual, and logic questions.

The SAT was famously derived from an armed forces IQ test. Even its origin as an acronym for Scholastic Aptitude Test hints at the exam’s initial purpose as a means to rank college applicants by some form of intelligence. However, the SAT and ACT diverged from abstract aptitude testing to evaluate more of the quantitative and verbal reasoning that IQ testing tries to avoid. For example, success on the math sections of the SAT and ACT definitely requires a substantial grounding in arithmetic, geometry, and both basic and advanced algebra. Evaluating what subjects have learned in school is not generally included in IQ testing.

It can fairly be said that the SAT and ACT are not intelligence tests, at least not in the conventional sense. At the same time, the fact cannot be ignored that test scores tend to correlate highly with measurements of general intelligence. The SAT may have moved away from its earliest associations with IQ testing, but that isn’t stopping College Board from exploring new forms of intelligence-based standardized exams for admission purposes. Ultimately, the ability to conclusively categorize exams as intelligence tests depends entirely on a conclusive definition of intelligence. Until we all agree on the latter question, we can only guess at the former.

IQ tests are simply not accurate, but they can provide you with some insight to the overall speed, health, and dexterity of your mind. As someone who has spent literally decades in the field of psychometric testing, I would not recommend joining a $400 a year club like Mensa just to hang out with Ritalin junkies. If you want a fast approximation of how well you would do on a psychometric test provided by someone in a clinical setting, start with a simple online test.