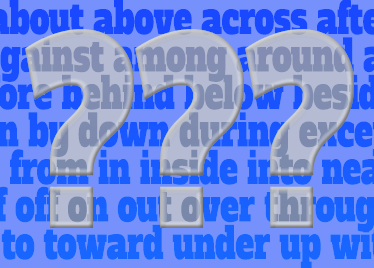 If today’s high school students are tomorrow’s leaders, our future looks very bright, at least in most respects. Where teens excel intellectually, emotionally, and technologically, however, they fall astonishingly short grammatically. If you don’t believe me, ask the nearest high schooler at hand what a preposition is. That dazed, deer-in-headlights look will tell you everything you need to know.

Identifying a preposition should be simplicity itself, considering we use them in nearly every single sentence (including this one!) These basic, everyday words like of, to, in, on, for, and with are essential to communication. Yet, they pass unnoticed. Most teens–probably most people–can barely recognize let alone define a preposition.

Actually, even the experts struggle to express exactly what a preposition is in easily understandable terms. Dictionary.com defines a preposition as “any member of a class of words found in many languages that are used before nouns, pronouns, or other substantives to form phrases functioning as modifiers of verbs, nouns, or adjectives.”

The Cambridge Academic Content Dictionary is equally unhelpful: “a word that connects a noun, a noun phrase, or a pronoun to another word.”

Worst of all, though, is the common tautology describing prepositions as “words which begin prepositional phrases.”

Talking about prepositions shouldn’t be this tough. To understand this essential part of speech, focus on relationships. Merriam-Webster offers one of the best definitions available:

Prepositions show direction, location, or time, or introduce an object. They are usually followed by an object—a noun, noun phrase, or pronoun.

Basically, we use prepositions to show when something happens, where something is, or to whom something belongs by connecting prepositions to objects: on the table, before the harvest, with a little help from my friends. More complex rules regarding subject-predicate relationships and idiomatic expression may govern preposition usage, but these little words are, in the end, simple to identify and explain.

And, despite rumors to the contrary, ending a sentence with a preposition is perfectly acceptable. In fact, the alternative often comes out much worse, as Winston Churchill reputedly (in various possible ways) mocked: “This is the sort of nonsense up with which I will not put.”