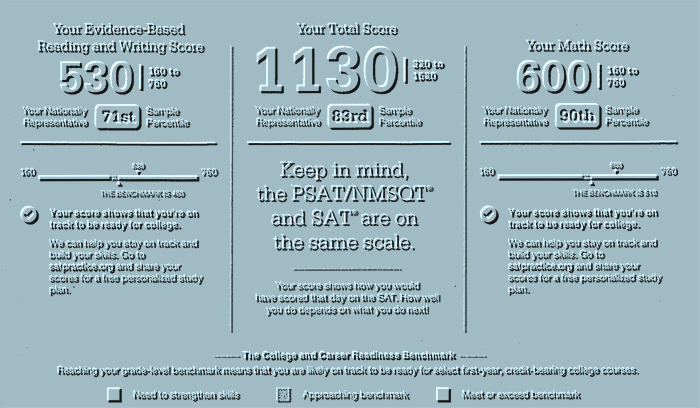 For a test intended to evaluate millions of high schoolers a year, the PSAT consistently raises more questions than it answers. The College Board may tout persuasive reasons to sit for the test in 11th grade, but most teens rarely walk away with the information they (and their parents) want most: what do my scores say about my potential on the SAT?

The 2017 PSAT appears more transparent and easier to interpret than ever. According to the official PSAT/NMSQT® Understanding Scores guide, the SAT Suite—from PSAT 8/9 through the SAT—uses a common score scale for the total, section, test, and crosstest scores. Thus, a 600 on the Math section of the PSAT suggests, all things being equal, a 600 on the SAT. But don’t take the data at face value, as the PSAT score report does not tell the full story…

Look at a 2017 PSAT score report and you’ll see a Nationally Representative Percentile for Evidence-Based Reading and Writing, Math, and Total scores. What does that mean?

“Nationally representative percentiles are derived from a research study of U.S. students in 10th or 11th grade and are weighted to represent all U.S. students in those grades, regardless of whether they typically take the PSAT/NMSQT or the PSAT 10.”

So the 530 EBRW in our sample score report may be in the 71st percentile for nationally representative 11th graders, but, among the User Group of 11th graders who actually took the PSAT/NMSQT and PSAT 10 administered in 2015–16 and 2016–17, that score is only 57th percentile. Big difference.

2. PSAT SCALED SCORES ARE MISLEADING
When College Board proclaims that the PSAT/NMSQT and SAT are on the same scale, their message is clear:

“This common score scale means that a student who took the PSAT/NMSQT and received a Math section score of 500 would be expected to also get a 500 on the SAT or PSAT 8/9 if they had taken either of those tests on that same day; a score of 500 represents the same level of academic achievement on all three assessments.”

Many students really do score about the same on both tests. Then again, since retaking a standardized test generally results in higher scores more than 50% of the time, many students may expect to score better on the SAT after taking the PSAT. However, certain differences between the tests–along with plenty of anecdotal examples–support the idea that SAT scores can be lower than PSAT scores. Consider ways the SAT presents a greater challenge:

In short, the PSAT is a less grueling, less stressful, less consequential exam. No wonder some teens score lower on the SAT than on the PSAT within the same general time frame.

But even if scores remain stable from one test to the other, their significance diminishes. That 530 EBRW sounds decent, at least better than average, when compared to other PSAT test-takers. However, on the 2017 SAT percentile charts, that score has only a 49th SAT User percentile.

When you think you scored in the 71st percentile but your effort translates to 49th percentile when it counts, that’s misleading.