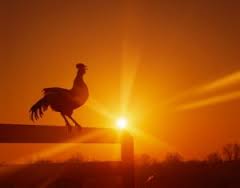 If you know anything about Chariot Learning, you know that we love practice tests. A quick scan of our Events Calendar reveals one common element for our many, many proctored practice SAT & ACT exams: no matter where we run these tests, they are held in the morning. But why?

Because the official SAT and ACT are also administered in the morning.

Effective deliberate practice requires conditions as close to the real thing as possible. Just as athletes scrimmage on regulation fields and performers rehearse on the big stage, test takers want to replicate all the elements of an official test. Of course you want to use official test material and set a stopwatch, but even factors like where and when you test impact the quality of your practice.

We strive to simulate test day conditions as closely as possible within reason. For example, we administer tests at our office, in schools, and in libraries to ensure large and relatively quiet classroom-style seating. We also run exams early in the day. The official tests typically begin at 8am, but we start around 10am as a concession to the tragedy of the teen sleep deficit. Starting any later would compromise the benefits of the practice experience.

What makes time of testing so important? Simply put, the academic and technical challenges tests like the SAT & ACT pose demand the highest levels of focus, energy, and commitment. Practicing without bringing your best to the effort is little better than not practicing at all because limited effort is not enough to move performance forward.

By comparison, a marathoner could practice in the middle of the night or after wolfing down a Big Mac meal, but what would be the point? Distance runners push the edges of their speed and endurance by replicating real race conditions in order to improve. The secret to the 10,000 Hour Rule is not necessarily the time put into practice but rather the commitment to push beyond your comfort zone, follow training activities designed to improve specific aspects of performance, and incorporate expert feedback to accelerate growth.

Such is the nature of deliberate practice. While adherence to such strict standards may seem excessive, the upside makes the effort worthwhile: the better the quality of your practice, the fewer tests you need to take to reach your score goals.

So go ahead and practice in the afternoon, evening, or middle of the night. Do single sections or test untimed. Ignore your testing accommodations. Take tests in your bedroom, a busy dining room, or in the car during road trips. It’s not to say that imperfect efforts won’t help at all, but rather that they won’t help enough. If you have lofty goals for improvement, only perfect practice tests make perfect.