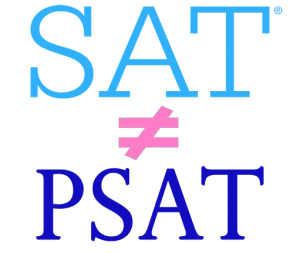 Anyone who knows Chariot Learning knows that we proctor a LOT of practice exams, most of them free. Because of our community work with libraries and schools, we field a LOT of calls regarding the SAT, ACT, PSAT, and, of course, practice exams. I’ve noticed recently that some of these topics are overlapping in unexpected and unhelpful ways:

ME: “Have you considered having your son take a practice SAT?”

PARENT: “Yes, we registered for the PSAT.”

Perhaps the point is not obvious. The PSAT clearly provides some degree of practice for the SAT. However, beyond the picayune distinction that the P in PSAT stands for Preliminary, the PSAT is not exactly a practice SAT and does not provide all the benefits a perfect practice SAT can.

CONTENT
Every question on the PSAT reflects the structure and content of the SAT. In that regard, students can draw a direct connection from the math, reading, and grammar content on one test to the same subject matter on the other. The PSAT doesn’t include the essay, but, then again, most current SAT experiences don’t either.

TIMING
The PSAT does, however, include fewer questions and allows more time per question. Considering how much the timed nature of the SAT amplifies its difficulty, the more generous timing of the PSAT misleads some test takers about their future prospects.

SETTING
Most teens take the PSAT at their schools, even if those institutions don’t host official SAT or ACT administrations. The entire experience feels much less pressured or stressful, as everyone knows–or at least should know–that the PSAT has no bearing on college admission with the specific exception of National Merit Scholarship recognition.

TIMELINE
Every PSAT in the nation is administered within roughly an eight-day span in mid-October with two weekday and one weekend date for schools to choose from. However, PSAT test takers don’t receive their scores until at least December. In this regard, the PSAT fails the prime directive of true deliberate practice by withholding the immediate feedback required for review and rectification. A high-quality practice SAT, on the other hand, even exceeds official tests in that critical regard. At exams we administer, for example, students receive their test scores as soon as they finish testing. With those scores, their test books, and maybe an expert tutor, they have all the ingredients for effective test review and maximum experiential value.

Another disadvantage of the timing of PSAT score release concerns the optimal timing of when 11th graders should be taking their SATs and/or ACTs. Juniors should take these exams as early in junior year as makes sense, based on their goals and schedules. When families wait until PSAT scores return to plan for the next step, they relinquish a full 50% of the year’s tests. The earliest opportunity to test in a new year is the February ACT or March SAT. Students busy with winter and spring activities combined with school breaks, state tests, APs, and finals often find the second half of the school year to be tougher for testing. With so many strong cases to be made for taking the SAT or ACT in August, September, October, November, or December of junior year, an early practice SAT can provide the right information for planning at the right time.

Basically, 11th graders have many good reasons to take the PSAT, but practice is not necessarily one of them. When you want to practice for the SAT, take a practice SAT!

Previous articleThe Truth Behind College PricingNext article What Exactly Is The ROTC Scholarship?