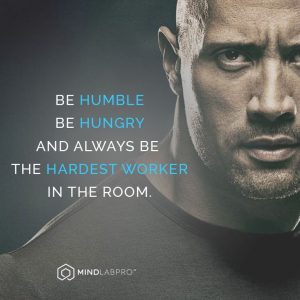 Who doesn’t love an inspirational advertising campaign featuring an affable icon of insane success? Sports lovers around the world are suckers for tales of toil and sweat. Nike may have pioneered aspirational advertising with its exhortation to “Just Do It,” and marketing that made Michael Jordan much bigger than just basketball, but they only set the pace. Other sports brands–most recently Gatorade with its awesome “Is It In You?” campaign–burn with their own aspirations to connect to driven consumers.

Under Armour has grown from a feisty upstart to a global sportswear powerhouse by keying in on what draws people to sports in the first place. Everyone wants to win. With its new “Will Finds A Way” campaign, Under Armour draws a direct line from training, effort, and will to massive victory.

Spokesperson Dwayne Johnson seems a veritable paragon of victory, having cut a charismatic swathe through the WWE to the top of the box office. Johnson, one of Hollywood’s funniest and fittest leading men, is joined by eight intense international athletes, each of whom has a compelling story of struggle and success. Of this admirable group, Johnson said the following:

“I’m honored to work alongside some of the most hard-working everyday women and men (and kids) for this campaign, all of which have risen to greatness through unwavering will, determination and being the hardest worker in the room.”

The hardest worker in the room.

That single phrase evokes effort on a monumental, matchless scale. No matter who you sit next to, no matter what room you find yourself in, being the hardest worker delivers profound advantages. And those who keep working compound their results to achieve outsize results.

Being the hardest worker in the room matters just as much in the classroom or test center as it does on the field or in the gym. As sure as you need countless reps at increasing levels of difficulty to build muscle, you need countless pages of increasing levels of content difficulty to build an intellect. Those who work the hardest invariably see the biggest gains.

An amazing test score won’t necessarily catapult you to a place in popular culture, but anyone seeking the most stratified levels of higher education is engaged, knowingly or not, in intense competition with millions of other aspirants. And as any successful athlete can attest, your best chance of victory lies not in your genetics or your background, but in your work ethic. That also happens to be the only factor you can control.

I’m not endorsing Under Armour or suggesting that the results of your hard work will match the success of any of the athletes in the “Will Finds A Way” campaign. But I am wholeheartedly recommending greater commitment to effort, preparation, and willpower as your path to greatness, whatever form that will take. Your dreams probably don’t mirror those of Dwayne Johnson, but then again, he couldn’t achieve his initial aspirations, as he mentions in the ad:

“Over the years, I’ve failed hard and had my dreams crushed, which inevitably put my back up against the wall. Through that struggle on my way back up, I’ve learned there’s one undeniable constant to success, and that’s to always be the hardest worker in the room.”

Can you smell what The Rock is cooking? Always be the hardest worker in the room.