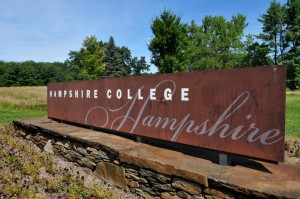 Tests are scary, right? People shouldn’t be judged on a single day’s performance, especially when high-stakes testing is so stressful. And what can a multiple-choice test say about a person anyway? Wouldn’t the college admissions process be more fair if schools stopped using the SAT or ACT?

Just to be clear, those are not my sentiments. Instead, I’m trying to channel the arguments of the champions of test-optional admissions, which is often lumped in with those who simply hate every form and application of standardized testing. Both factions found reason to celebrate back in 2015 with the very public announcement that Hampshire College would not to accept SAT or ACT scores from applicants. This was a significant step beyond test-optional into a realm where standardized test scores have no value whatsoever in admissions. Instead, according to the president of the college, a more holistic admissions process reigns at Hampshire:

In our admissions, we review an applicant’s whole academic and lived experience. We consider an applicant’s ability to present themselves in essays and interviews, review their recommendations from mentors, and assess factors such as their community engagement and entrepreneurism. And yes, we look closely at high school academic records, though in an unconventional manner. We look for an overarching narrative that shows motivation, discipline, and the capacity for self-reflection. We look at grade point average (GPA) as a measure of performance over a range of courses and time, distinct from a one-test-on-one-day SAT/ACT score. A student’s consistent “A” grades may be coupled with evidence of curiosity and learning across disciplines, as well as leadership in civic or social causes. Another student may have overcome obstacles through determination, demonstrating promise of success in a demanding program. Strong high school graduates demonstrate purpose, a passion for authenticity, and commitment to positive change.

Sounds exciting, doesn’t it? The commitment to test-blind admissions and accompanying press definitely seemed positive for Hampshire College at the time. The school may have been removed from the U.S. News & Word Report “Best Colleges” rankings, but their yield–the percentage of accepted students who actually enroll–rose in a single year from 18% to 26%. In the Washington Post article which allowed Jonathan Lash a public forum to explain both the reasoning behind and impacts of this new admissions policy, the president of Hampshire sounds absolutely thrilled with every aspect of this brave, new, test-agnostic world.

But the simple truth is that the SAT and ACT didn’t go away. Despite the growing number adopting test-optional or test-flexible positions, many conventional students still need to submit test scores. Explore the list of test-optional schools, and you will find a preponderance of private liberal arts colleges. Why?

Test-optional admissions is expensive. And YOU have to pay for it.

SAT and ACT scores offer a simple, reliable, relevant, and inexpensive way for colleges to put applicants’ grades and courses in context. Test scores enable admissions offices to assess students from a wide spectrum of high schools even though each school and even each teacher varies in academic rigor. Without these scores, the process of determining what an individual’s GPA really means becomes much more complicated and thus costly.

In 2015, Hampshire College was representative of many test-optional colleges. 2014-15 Tuition, Room, and Board at this liberal arts school in Massachusetts totaled a tick under $60,000. Before the school waived SAT and ACT scores entirely, its 18% yield rate was barely high enough to keep the school off the list of Colleges with the Most Ignored Acceptance Letters. Neither of these facts denote anything about the quality of the school’s education or campus experience, but the fact remains that the admissions decisions a costly, non-competitive school has to make are different from those required by more competitive schools.

If Hampshire seemed visionary four years ago, what does the institution presage for the future of test-blind admissions? Early in 2019, the school announced that the college would not be accepting a new class in the fall. In fact, according to Masha Gessen of The New Yorker, the current college president Miriam Nelson stated that she learned that the college was in financial trouble in May of 2018, when “the departing president Lash told her that first-year enrollment for the fall had fallen short of expectations for the third year in a row.” Rolling layoffs are currently casting a pall over the campus, while the college seeks a more solvent partner institution.

A growing number of colleges may be opening their doors to applicants who wish to be judged on other merits, but sometimes those policies represent little more than targeted marketing campaigns. For better or for worse, the dream of a truly test-free admissions landscape is, at least until better and cheaper assessments come along, nothing but a fantasy.