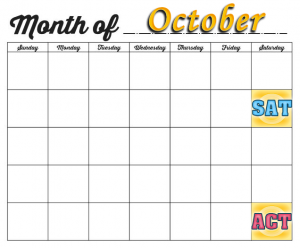 For high schoolers, the academic year roars in with early opportunities to take the SAT & ACT. With the addition of an awesome August SAT administration, October no longer serves as the first chance to take either test. However, the month of fall foliage and Halloween treats is still one of the best times to take the SAT and ACT.

What’s so great about October, besides pumpkin spice lattes? So early in the school year, classes haven’t really ramped up, which affords busy students a bit of breathing room to prep for the big tests. Most extracurricular activities, with the notable exception of fall sports, are equally slow to start. Thus, students can actually focus on the tests in October. However, other reasons sweeten the deal for October for 11th and 12th graders alike.

SENIORS, even those late to the college admissions party, enter October feeling the pressure to finalize applications. The October SAT dates is typically the last administration accepted in Early Action or Early Decision applications. Scores for the ACT towards the end of October–inexplicably an equating test with a longer scoring period–may unfortunately arrive too late for early deadlines.

JUNIORS who heed our advice to test as early in 11th grade as makes sense for them love October testing for the opportunity to clean up this critical task before all those other academic and extracurricular commitments get crazy. The fact that the month opens with the SAT and ends with the ACT permits effective preparation for both in a short span of time. Even better, National Merit Scholarship hopefuls can target either the October or November SAT in concert with the mid-October PSAT.

December stands as a critical milestone for test takers, either as the last chance to finish testing before Winter Break for juniors or just the last chance for most seniors. Even those with the luxury of testing in December should target October as Plan A. If you earn your best scores in October, you’re done… if not, you still have December as Plan B.

The elimination of the January SAT administration pushed the first SAT of the new year to March, preceded only by the February ACT now available in all states. Juniors who wish to avoid testing in early spring–which too often turns into late spring–should commit to testing in mid-autumn, when the pressure is so much lower. Seniors, already under pressure, need to lock in their target test scores while there’s still time. In either instance, October is an excellent time to sit for the SAT & ACT.

New Yorkers are indeed able to take the February ACT IF they’re willing to take it in another state. Students where I live (Westchester County, NY) find that going to New Jersey or Connecticut (both not more than 45 minutes away and perhaps even closer for some) isn’t too much of a burden.