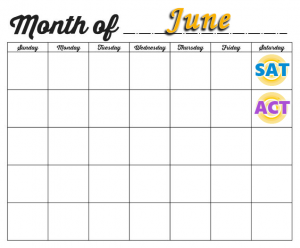 Of all the test administrations of the year, the ones in June present the most problems. Many high schools have already flipped the CLOSED sign while others are facing finals and other culminating tests. Even worse, students have to contend with a host of other distractions:

Clearly, the odds of a student earning his or her best SAT or ACT scores in June appear unfavorable to say the least. No wonder we strongly recommend that high schoolers take the tests as early in junior year as makes sense based on preparation and extracurricular commitments.

Yet, a case for the June SAT & ACT can and should be made. Three different groups of students benefit from blocking out the first two weekends of the month for testing:

1. Juniors who have already prepped but haven’t earned the scores they want
Look at test preparation as you would any practice for a sport or a skill. There is a seasonal aspect to testing, in the sense that you begin practicing at a certain date to be ready for the big day of the official exam. Athletes may work on conditioning and club sports all year long, but the season is sacrosanct. Teens who prepared for exams in April or May have already laid the foundations for success, even if their most recent scores fell short. Keeping that momentum going into June requires less effort than restarting almost from scratch in mid-summer.

2. Juniors who haven’t prepped yet but still can
Very few people find high stakes testing relaxing. On the contrary, with so much riding on test scores, many teens succumb to varying levels of test anxiety. Test day stress creates pressure that can impair performance, so one of the keys to better test scores is reducing anxiety. Testing in junior year minimizes stress because students know they’ll have opportunities to improve scores later if they don’t reach their goals. But the first round of senior year tests are usually the last ones acceptable for early action/early decision applications. The October and November exams tend to the last ones usable for general admission to competitive schools. All this explains why teens are likely to be more relaxed at a test in June than in October. Take advantage of the lower stress of the spring dates.

3. Sophomores in advanced classes expecting a very busy junior year
Most 10th graders aren’t thinking about the SAT or ACT, nor should they. Better to finish sophomore year strong, maybe with a couple of SAT Subject Tests. But some students are on a fast track with an eye towards a junior year packed with AP and other advanced classes along with a full slate of extracurricular activities. Honors students who have already completed Algebra 2/Trigonometry might consider preparing for and taking June tests.

If you don’t feel mentally exhausted at the end of an academic year, you probably didn’t work as hard as you should have. Nonetheless, one last push to earn your best test scores in June can lead to a much easier and more enjoyable summer!