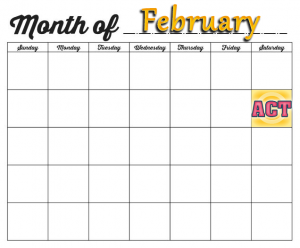 The school year–especially if you are a student, teacher, or faculty member–lasts a long, long time. From the end of one summer to the beginning of the next, high schoolers navigate an obstacle course of exams, projects, papers, and extracurricular commitments, punctuated by the occasional day or week off. Success on big tests like the ACT depends in part on scheduling preparation and testing during the less frenetic months in a student’s schedule. That’s what makes the February ACT so attractive.

What really goes on in January? In my part of the country, students take midterms in January, but those tests don’t trigger anywhere near the stress of finals, APs, or state tests in the spring. Certain sports obviously run through the winter months. However, an ironic advantage of winter sports is that practices are rarely rescheduled for inclement weather in the way fall and winter outdoor athletes struggle with. Other big activities like robotics and theater just begin to get serious in mid-January. Since a student prepping for the February ACT can begin during Holiday Break and be finished with testing by President’s Day, this test date avoids many of the scheduling conflicts that complicate a high schooler’s life.

Another benefit of the February ACT relates to the months that follow. Since retakes play such a significant role in the path to a teen’s best score, scheduling should always take Plan B into account, as in, “If I don’t earn my best score this time, when is my next opportunity to test?” The next ACT date after February falls in April, which is itself an excellent time for many to test. The ACT after April, however, is scheduled for June, a tough time for standardized testing. Not only does February make more sense from the perspective of the next ACT, but a convenient SAT falls between the two in early March.

By mid-April, most high schoolers embark on a roller coaster of Spring Break, spring sports, finals, APs, and a slew of last-minute assignments that must be completed before the school year ends. Following the proven philosophy that 11th graders should take the SAT and ACT as early in the school year as makes sense based on their goals and commitments, February represents one of the last, best chances to ace the ACT before a busy spring. Now that New York has joined the rest of the Union in administering this test, everyone can share the fun. Make the most of a slow winter to prepare for and take the February ACT.