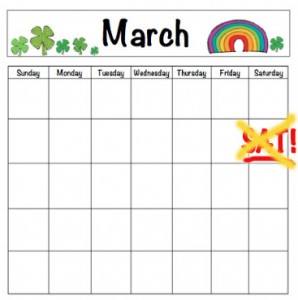 For the last decade or longer, I’ve staunchly advocated the idea that high school students should take the SAT and/or ACT as early in junior year as makes sense for them. Once winter break ends, testing options tend to conflict with other commitments, such as January midterms, spring break, APs, finals, prom, sporting events, etc. But no matter how hectic a high school junior’s schedule may be, one month seems blessedly free of distractions. That’s why March has traditionally been an ideal time to take the SAT.

In 2016, however, March does not look like such an ideal time to take the SAT.

Nothing changes as far as the timetable or competing commitments go; May and June remain problematic for both academic and extracurricular reasons. One major thing has changed, though, that impacts planning on a much deeper level: the SAT itself.

Unless you’ve been living under a rock, you know that the SAT is changing substantially. This revision does not, in itself, preclude testing in March. The College Board has made four full-length practice tests available for free, which makes preparation simple enough for anyone so inclined. However, two factors should give pause to anyone thinking that March 2016 could be the right time to get that pesky SAT out of the way:

1. March will be the first administration of this new format SAT.
The revised SAT may still be testing much of the same reading, math, and writing skills covered by the last iteration of the exam. Structurally, however, the test differs in important ways. And while motivated students might prep for the smoothest test day possible, the adults in the room actually responsible for administering the SAT may be far less prepared.

Students who took the October 2015 PSAT–the first test incorporating the new format–had to endure over an hour of paperwork before they could begin their exams. Understandably, most became bored or even demoralized. As this issue was universal rather than confined to specific schools, the failure accrues to the test maker. Were I a betting man, I’d lay my money on more of the same problems in the first administration of the new SAT.

By and large, test proctors receive very little training apart from a manual to read on test day. Thus, the potential for small administration failures, not to mention ones large enough to invalidate test scores, appears unreasonably high. Who wants to be a guinea pig when it comes to the SAT?

2. March SAT scores will not be released until mid-May at the earliest.
A major benefit of the March SAT date, apart from its placement during a relatively easy month for high schoolers, is that students that fail to hit their score targets still have chances to test in May and June. Since the alternative is to wait until senior year to try again, many juniors bite the bullet and sit for those late spring exams.

The decision to test in May or June despite all the other distractions depends on knowledge of March scores. Historically, SAT scores are reported 19-21 days after a national test date, which would give a March tester ample time to register and prepare for later test dates.

Unfortunately, the College Board recognizes that scoring the new test will likely be as fraught with difficulties as every other aspect of the exam has been. Not only are we dealing with a new structure, but also with new scales and subscores. Considering how badly ACT has botched score reporting after a relatively minor revision, the outlook for timely SAT score reporting seems bleak at best. No wonder March SAT scores are not expected until at least mid-May.

Consequently, students will need to commit to the May and/or June tests without knowing their March SAT scores. Not cool.

Of course, these issues may not matter to students who have no other option but to test in March. Nor are they relevant to those who will eschew the new SAT altogether this spring; the ACT promises a far more predictable test day experience. But students who still plan to sit for the March SAT should consider both what can go wrong on test day and what they will do afterwards now, before the fireworks really start!

Previous articleRate Your Pain to Make It WaneNext article Do I Qualify for a National Merit Scholarship?

On point. We are making the same recommendation to our students. Sit this one out and go for the ACT.