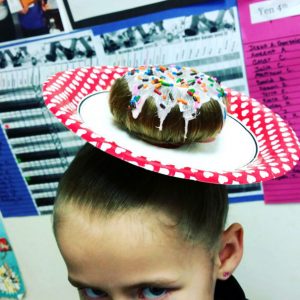 Have you noticed that getting into a testing center for an SAT or ACT can be tougher than getting onto an airplane? Longstanding but increasing fear of cheating domestically and abroad has ushered in a focus on security only the TSA could be proud of. For most test takers, the extra level of scrutiny before testing is little more than an annoyance. In rare instances, however, even teens who brought all of their required documentation may be turned away.

Students scheduled for the November 2016 SAT at Garinger High School learned this the hard way when many of them were denied access to their tests because of their hair. No, their hairdos weren’t so wild or extravagant that they’d be distractions to others, nor were they hiding special cheating devices. These students were turned away for a more prosaic and preposterous reason: their hairstyles were different than those in the pictures on their admission ticket.

Alijah Barney, one of about 60 students affected by these draconian security standards, described the situation:

“They were checking and basically sending everyone out the door,” the student said, “Saying you can’t take your test because one girl – she had braids in her hair for her picture, but the actual day of the test, her braids were taken out. One boy – he had cut his hair off and saying he couldn’t take the test – it didn’t match the picture.”

A College Board spokesperson acknowledged the error and commented that the organization will be taking steps to improve registration processes, including by providing additional guidance to test center supervisors on how to determine if an admission ticket photo meets College Board criteria. In addition, the College Board has offered free make-up tests for affected Garinger HS students.

Nonetheless, the stress of either being turned away or watching friends get turned away undoubtedly led to a highly unsatisfactory testing environment. Ultimately, every test taker wants to ensure as smooth and stress-free a testing experience as possible. So how can you make sure there won’t be much ado about your ‘do on test day?

1. Carefully review the criteria for photo ID at testing centers. Wild hairstyles are fine. Just realize that getting into your test will be much easier if you look like you did when your identification photo was taken.

2. Know your rights as a test taker. Many test day nightmares can be attributed to proctor error. Because proctors are often so inexperienced and poorly trained, they become the weakest, most unpredictable link in what is supposed to be a very standardized testing experience. Research the rules in advance to the extent that you know more than your proctor… when things get crazy, you may be glad you did.