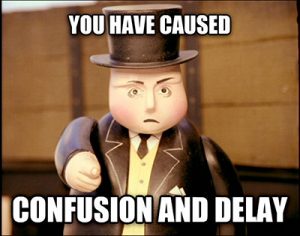 Sir Topham Hatt, the magisterial Fat Controller in the Thomas & Friends series, is notorious for his commitment to making the trains run on time. Nothing chafes him more that the twin terrors of confusion and delay. Nothing should irk you more either on test day, especially when the confusion and delay come from clueless proctors.

Such was the sorry situation during the April 2016 administration of the ACT in a school district that shall remain nameless. One of our students was on the waitlist, so she arrived at the exam over an hour early. The proctors placed her on a line with other students who were skipping the ACT Writing Test, but allowed students taking Writing to enter. She remained on that line for more than two hours. Consequently, she and other students began their exam somewhere between one and two hours late. No timing strategies can compensate for that level of confusion and delay.

Obviously, ACT, Inc. recognized that their delayed exam diverged too dramatically from the standards of test standardization. Thus, our student received the following Dear Examinee message:

“This message concerns the ACT test you took on April 9, 2016, at XXXX. A review of test date documentation shows that some testing rooms started late. According to the test coordinator, unexpected issues with staffing caused a significant delay in starting several of the test rooms. We are very sorry this problem happened on test day.

“Because of the late start, ACT is offering you the opportunity retake your April ACT test on May 14, 2016. Taking the retest is optional — if you choose not to retest, your answer document from the original April 9 test administration will be scored. If you choose to retake the test, however, your answer document from the April 9 test administration will not be scored.”

Their response may surprise some, but neither ACT nor the College Board have many options to rectify test day errors. The timing of the retest was particularly troublesome coming on the heels of AP testing.

On the other hand, our student and every other who struggled through an ACT that was longer and more painful than usual were given the option of a free pass. Those who thought they scored well could accept their scores, whereas those who think they could do better will have a chance to prove it. Considering how challenging most test takers found the April ACT, this retest may be a blessing in disguise.

Nonetheless, nobody feels grateful for wasting a day, not to mention all the time leading up to it, taking an official test that will never be scored or reported. Students have little recourse when those running a test administration botch a simple job. As ever, always know more than the proctors about how a test should be conducted. If you’re lucky, you’ll have a smooth test day… if you’re smart, you can make a rocky test day smoother!

Previous articleOnly a Third of Teens Ready for CollegeNext article Working Playfully: How to Ace your Biggest Exams