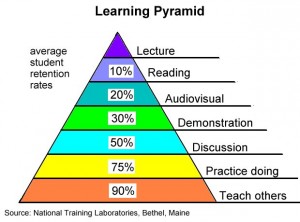 Imagine if the only way you were allowed to learn something was to first hear it in a lecture and then study it on your own. Sounds restrictive, doesn’t it? Obviously, lectures prove perfect for certain educational endeavors, but then again, so do lab work, flipped classrooms, independent research, and a host of other multimodal approaches. And yet, no matter how a student is initially taught something, he’s expected to master that information alone, usually by sitting at a desk for hours reviewing notes.

Here’s a revelation: maybe self-study isn’t the best path to content mastery for every student… maybe even not for you!

One surprisingly effective strategy to learning is devilishly simple: teach it. The infamous Learning Pyramid, based loosely on the work of educator Edgar Dale, touts teaching as the most effective route to knowledge retention. More recent research helps provide the evidence this idea has needed. For example, the “protégé effect,” according to Annie Murphy Paul in TIME magazine, occurs when student teachers score higher on tests than pupils who are learning only for their own sake.

Even preparing to teach something can accelerate mastery. A group of researchers tested the potential effects of merely expecting to teach on learning:

What happened? Participants expecting to teach outperformed the ones expecting a test in all assigned tasks related to the assigned passage. The researchers concluded that instilling an expectation to teach seems to be a simple, inexpensive intervention with the potential to increase learning efficiency at home and in the classroom.

The Roman philosopher Seneca asserted this truth ages ago: “While we teach, we learn.” Many of us apply such practical wisdom in our professional lives, but don’t look for ways to implement teaching-as-learning for ourselves or our own children. Shouldn’t we?