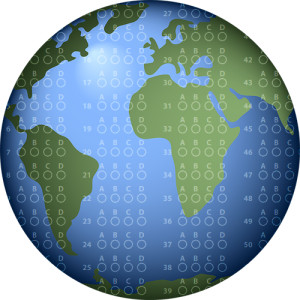 Of the roughly two million high school students who take the SAT annually, roughly 100,000 reside outside of the United States. In fact, both the SAT and ACT are offered in over 120 countries around the world. An international student who seeks admission to a US college must take the TOEFL (Test of English as a Foreign Language) as well as the SAT or ACT.  So who is coming to the US to study, and why?

According to Inkstone, a clearinghouse for Chinese data and trends, only 2% of the ten million Chinese students sitting for the GAOKAO (the grueling 2-day entrance exam, the sole determinant of college admission) will score high enough to gain admission into one of the top Chinese universities.  Other Asian countries, most notably Japan and Korea, have similarly strenuous entrance exams. Students who have the means but not the test scores may opt for an American university experience.

SAT registration requirements for foreign students are complicated. Visit collegeboard.org, and you’ll find that the registration requirements vary by country. In Ghana, for example, students must register by regular mail instead of online. In several countries, no provisions are offered for changing test dates or getting on a waiting list. Since the recent cheating scandals, fewer tests are being offered.  SAT exams are only offered overseas in October, December, March, and May.

What about the ACT? From 2012 through 2017, more graduating seniors in the United States had taken the ACT than the SAT. However, in other countries, the ACT has not been nearly as popular, despite being offered six times a year at 400 testing centers worldwide.  As a more content driven test requiring less critical thinking finesse than the SAT, the ACT might be a better alternative for some international students, if only they knew about it.

Do international candidates face the same academic requirements as domestic applicants?  Policies differ from college to college.  Admissions standards tend to be more rigorous at top colleges due to high competition for limited spots. For example, MIT’s website states that in 2018, 16,992 US students applied, and 1349 were admitted, an acceptance rate of .08%. For international students the competition was stiffer: 4,714 applied and only 115 were admitted, just .02%. With other schools, an international student might find his or her chances are roughly equal to a US student, or might even have a slight edge.

Another challenge test takers overseas, particularly those in certain parts of Asia, must contend with is the occasional wholesale cancellation of SAT or ACT administrations due to rampant cheating. Fortunately, options are expanding for these students; the University of New Hampshire will be the first flagship state university in the US to accept gaokao grades in place of the SAT or ACT, a decision made in an attempt to attract outstanding Chinese high school students.  UNH set up an account on WeChat, China’s most popular social media platform, touting itself as “Energetic, safe and the ideal destination for overseas studies”.

International student admissions are on the rise, but American college-bound students need not fear being shut out by a tide of incoming internationals. Worldwide, it is still more popular–and much cheaper–to study in one’s home country. The full-tuition windfall some students bring to the US can also help domestic colleges make ends meet. Even better, colleges with diverse student bodies with representatives from around the world offer vibrant environments for learning.

Patty Camloh(https://chariotlearning.com)
Patty Camloh, our lead Syracuse-area tutor, uses her background in engineering and education to help students achieve their best results. She has worn many career hats, including environmental engineer, high school teacher, and counselor. Patty also has experience as a specialist in high school to college transitioning for a college consulting firm .

I live in morocco, When i try to register for the ACT i do not find my city (casablanca). I think there is no ACT available there