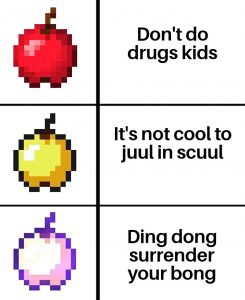 When one considers the many reasons why students fail to earn their test scores, each factor seems susceptible to a chemical solution. Depressants might take the edge off anxiety, whereas stimulants and study drugs could provide the boost needed to power through tough questions. Considering how complex and challenging some test questions can be, couldn’t the mind-expanding properties of psychedelics be a potent secret weapon.

Sure, you may say, some people sit for high stakes tests while drunk or high. Chelsea Handler famously admits to taking her SATs on acid, and things turned out very well for her. Then again, she didn’t even go to college.

In fact, I couldn’t find any evidence of beneficial outcomes of controlled substance use during standardized testing. Even vaunted study drugs and cognitive enhancers hurt rather than help test performance. Non-prescription use of prescription drugs like Modafinil or Adderall impairs focus, motivation, and creativity. Predictably, the potential boost to academic productivity study drugs are expected to deliver for non-prescribed students is also a myth, with their undesirable long-term negative effects on academics often accompanied by mood swings, sleep disorders, anxiety, paranoia, and more.

Even worse, even using controlled substances like alcohol or marijuana in the days before big tests can wreck performance, according to Dr. Ginny Schwartz at St. Lawrence University.

“Getting intoxicated can have a negative impact on cognitive functions (concentration, memory, attention) for 48 hours… Although most people take for granted that alcohol impairs memory of events that occur during intoxication, alcohol consumption has further-reaching effects on memory and learning ability.

“Marijuana has the same impact on sleep that alcohol has, throwing off the sleep cycle and impacting how a person feels for at least two additional days. Marijuana suppresses neuronal activity in the hippocampus, resulting in problems with attention, memory, and concentration… Marijuana significantly increases heart rate, weakens the heart muscle, and affects blood pressure–the increase in heart rate can be a concern for someone already dealing with anxiety ( and particularly panic).”

The enduring influence of drugs on teens’ brains and bodies appears to at least correlate not just with worse test score but with lower grades in general. Data from the 2015 National Youth Risk Behavior Survey (YRBS) show that students with higher academic grades are less likely to engage in drug use.

So, in summary, no matter how funny or inspired the idea sounds, taking tests drunk, high, sloshed, stoned, ripped, buzzed, tweaked, or tripping is always a bad idea. Students should always take medications as prescribed by their medical professionals, of course, but abstain from everything and anything else in the controlled substance category at least three days before a big test.