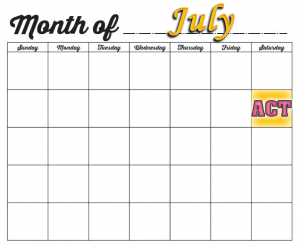 For generations, college-bound teens were forced to restrict college admissions testing to the same months they had to endure academic testing, which is to say during the school year. The dream of tackling the SAT & ACT during the months that school was out remained merely a fantasy until recently. Today, most–but not all–students have open access to summer testing. College Board claimed late summer, with a very convenient and popular test towards the end of August. The folks at ACT, on the other hand, chose mid-July. Did they choose wisely?

The suitability of this test date depends heavily on where a prospective test taker goes to school. Certain parts of the United States see school end in May, while other regions extend the academic year (at least for public schools) into late June. Students with the opportunity to prepare for six or more weeks unburdened by other academic obligations can make the most of the July ACT. On the other hand, those who don’t break until late June usually need a couple of weeks to shake off the stress of the school year.

Plus, the July ACT isn’t even administered in every state. Specific legislation governing testing limit the number of exams ACT is willing to offer in New York and California, with the July date failing to make the cut. At least we got the February test!

Considering how large the Golden State is, high schoolers there might not find a neighboring state accessible for testing purposes. New Yorkers, on the other hand, may find New Jersey, Pennsylvania, Vermont, Connecticut, Massachusetts, or even Canada close enough to make testing feasible.That said, is the July ACT administration worth the effort for a New York state student?

This administration falls on the second Saturday of the month, not long after the patriotic pyrotechnics of Independence Day. Most high schoolers in New York are still staggering from the long school year and desperate for a break from academic endeavors. For these students, the July ACT does not make sense.

Some teens, however, attend private or parochial schools that break early in June, allowing for a full month or more of decompression and test prep. Those students might well consider making a run for July, especially if they anticipate less time to study towards the end of summer. In addition, those students who prepped well for the June ACT might appreciate a fast follow-up to push scores even further, as the next scheduled ACT doesn’t fall until mid-September.

In summary, New York teens who already prepped for the June tests or have sufficient time and focus to prep through June might consider sitting for the July ACT, assuming they will be able to travel and test out-of-state with minimal stress. All other New York juniors and seniors would likely be better off focusing on the August SAT and/or September ACT under more convenient conditions.

Previous articleTemperature Strategies for TestingNext article Who Tells YOU About Test Prep?