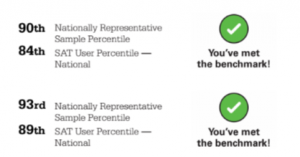 American high school students take a staggering number of tests, each seemingly scored on a different arbitrary scale. Traditional school tests are usually scored on a 100-point scales, but APs are scored 1-5, ACTs 1-36, and SATs 200-800 per section. How can you possibly tell how well you’re scoring with so many different score ranges? If you want to understand score performance, you must look at percentiles.

Unfortunately for students taking the spring SAT, percentile data wasn’t expected because, well, comparing student performance on a test that has never been administered before is pretty difficult. We provided the means to approximate percentiles for the spring 2016 SATs, since the College Board indicated that percentiles would not be available until the March, May, and June tests were analyzed.

Now that the May SAT scores have been released, however, nothing makes sense. How are we supposed to interpret not one but two different percentiles?

The May SAT score report provides both a Nationally Representative Sample Percentile and an SAT User Percentile – National.

The User Percentile — National compares your score to the scores of typical college-bound U.S. 11th- and 12th-grade SAT takers. In terms of the PSAT 10, user group percentiles are derived from students in the student’s grade (10th) who tested in the fall administration of the PSAT/NMSQT. How the College Board determines SAT User Percentiles is not at all clear.

In fact, nothing about this data makes sense. SAT User Percentiles are either based on the October PSAT, which is one administration of a similar but not congruent exam to a broader population, or based on the March test. Or maybe on nothing at all. Nationally Representative Sample Percentiles appear even more pointless, since colleges probably don’t care how applicants compare to non-applicants or how students who take the SAT compare to those who do not. These sample percentiles look more impressive, as they are inflated, but their value wilts under even modest scrutiny.

So, those of you who took the May or June SAT can expect percentile ranks. Just don’t expect them to mean much.