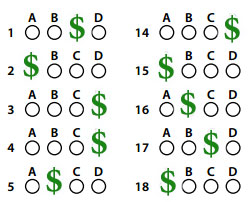 No one who lived through the 80s could forget Lifestyles of the Rich and Famous, Robin Leach’s encomium to American opulence. But wealth, at its best, offers much more than lavish mansions and gold-plated yachts. Once life’s necessities have been taken care of, parents and children alike are free to dream, to plan, and then to devote resources to achieving even the loftiest of aspirations. And what is more aspirational than college admissions?

The SAT might have been created to democratize college admissions but the oft-reviled exam has, in recent decades, been condemned as a “wealth test” or, even worse, a Student Affluence Test. However, critics who point out the correlation between student success and parent income tend to unfairly minimize the contributions of the former in favor of the latter. Anyone with experience in standardized testing can assure you that scores cannot be purchased. Wealth may open access to every necessary and elective educational advantage, but–unless you aren’t playing by the rules–you can’t buy a single point on test day.

So why do the scions of privilege tend to score better as a cohort on standardized tests? One astute teen explored just that and shared his observations in a New York Times article, How I Learned to Take the SAT Like a Rich Kid. What did he learn?

…I didn’t understand why so many of them were enrolled in the optional SAT prep section of our summer program. Why would such impressive high achievers spend their summer nights storming through a massive SAT book? Many of them already took weekend SAT prep courses back home. Did they just think it was fun to time one another on practice sets?

…I realized that they didn’t just want to score exceptionally well on the SAT. They were gunning for a score on the Preliminary SAT exams that would put them in the top percentile of students in the United States and make them National Merit Scholars in the fall.

…This past month, I watched many of these friends dazzle their social media followers with acceptance letters from Northwestern, Harvard, Williams and Duke, as well as six-figure Presidential Scholarships to various public universities. Their success was hard-earned and I am proud of them. I only wish that more lower- and middle-income peers knew how to pursue such aggressive strategies.

The full article deserves a thorough read as an example of how differently teens in different educational communities and socioeconomic brackets approach academic challenges. The moral of the story, though, is that success for any student derives from hard work, persistent effort, and focused preparation. If your champagne wishes and caviar dreams include acceptance by a highly-competitive college, learn to take the SAT & ACT like the rich kids!