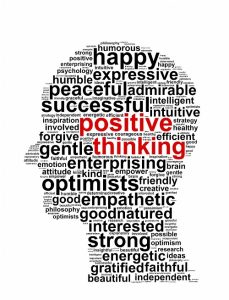 Philosophers have been promoting the power of a positive mindset for ages, and today scientists are studying the myriad ways negative emotions hurt and positive emotions help performance. But we cannot consider the power of positive thinking without recalling the book that popularized both the phrase and the practice.

Norman Vincent Peale, born in 1898 and buoyed for nearly a century by his own cheerful cognitions, brought a message of reality-altering optimism–“Change your thoughts and you change your world”–to the public. His most famous work was, of course, The Power of Positive Thinking. This influential book asserts that success flows from mindset. Anyone infused with healthy self-belief and calm control can accomplish amazing things. Sounds magical, right?

Perhaps success requires much more than energetic optimism, but that doesn’t mean Peale doesn’t have valuable lessons for anyone striving for academic or test success. In many ways, The Power of Positive Thinking is highly relevant to test takers:

ON VISUALIZING SUCCESS
“Formulate and stamp indelibly on your mind a mental picture of yourself as succeeding. Hold this picture tenaciously. Never permit it to fade. Your mind will seek to develop the picture… Do not build up obstacles in your imagination.”

ON DETERMINATION
“People become really quite remarkable when they start thinking that they can do things. When they believe in themselves they have the first secret of success.”

ON PERSEVERANCE
“It’s always too early to quit.”

ON TEST ANXIETY
“You do not need to be a victim of worry. Reduced to its simplest form, what is worry? It is simply an unhealthy and destructive mental habit.”

ON SELF-BELIEF
“BELIEVE IN YOURSELF! Have faith in your abilities! Without a humble but reasonable confidence in your own powers you cannot be successful or happy. But with sound self-confidence you can succeed. A sense of inferiority and inadequacy interferes with the attainment of your hopes, but self-confidence leads to self-realization and successful achievement.”

Positive thinking really does have power and is worth practicing for better test scores and a better life. If you don’t believe Peale’s proclamation that “Our happiness depends on the habit of mind we cultivate,” Herm Albright has an even better reason to cultivate an energetically optimistic and confident mindset: “A positive attitude may not solve all your problems, but it will annoy enough people to make it worth the effort.”

Previous articleBrain Food: Chocolate for a Sweet ScoreNext article Multiple-Choice Tips for Everyone