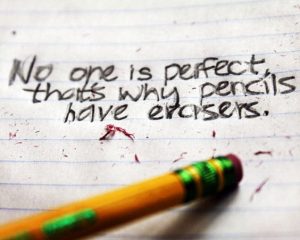 Meet Martha, a motivated, overachieving high school student. Martha lives by the credo, “If it’s not perfect, it’s not done.” In college-level vocabulary terms, she is assiduous, diligent, and exacting. In short, Martha is a perfectionist. Her indefatigable commitment shows in her outstanding grades, yet she struggles time and time again on standardized tests. Why?

Of all the reasons why great grades don’t necessarily translate to great test scores, perfectionism may be easiest to overlook. You might imagine that a unwavering commitment to always doing things right, no matter what the cost, would serve a student well on test day. But true perfectionism often impedes growth and hobbles progress.

True perfectionism manifests as a refusal to make mistakes, which can lead to debilitating procrastination and toxic self-loathing. At its root, according to author Michael Law, perfectionism isn’t really about perfection: “It’s about fear. Fear of making a mistake. Fear of disappointing others. Fear of failure. Fear of success.” For true test success, purists need to let things get a little messy.

Keep Moving
The most pernicious effect of fear of failure on a test is a refusal to move on from tough problems. Getting stuck on one question can cost you not just the difficult point but all the others you didn’t get to later in the section. For example, test takers are allotted 60 minutes to answer 60 ACT Math problems. Spending three minutes on a single problem, even if you get that one right, takes time away from at least two other ones, which may very well have been easier. For maximum success, move on when you are stuck. If time permits, you can come back to those tough problems once you’ve answered the rest.

Learn From Mistakes
You would think that, since practice is so often paired with perfect, that perfectionists would embrace incremental improvement towards their goals. But this personality type often rejects constructive criticism. The only path to true mastery is to abandon that fixed mindset and embrace corrective feedback.

Forget About Perfect
While most baseball players love to swing for the fences, teams often win using a “small ball” strategy which emphasized placing runners on base and then methodically advancing them into scoring position. In the same way, test takers succeed by working towards their best test scores, which will–more than 99% of the time–be less than perfect. The good news is that nobody needs a perfect score. Every school releases the mid-50 scoring range of last year’s incoming freshmen, which provides excellent guidance on the kinds of scores that improve admissions chances. Work towards those targets rather than unattainable perfection.

Previous articleShould I Study for the ACT and SAT at the Same Time?Next article How to Succeed At School