High stakes standardized tests like the SAT & ACT distribute scores along a massive bell curve, where most test takers fall within the big part of the bell. Anyone taking one of these tests seeks to score as far to the right on that curve as possible, knowing that only 1% of the population can score in the 99th percentile. But what if you found out about an online community–free and accessible to anyone–where more than one out of every two members score in the 99th percentile on the ACT. Would you want to join?

Before I reveal this magical society of testing savants, we should talk about basketball. Bobby Knight, a legend of men’s college basketball, retired as one of the winningest coaches in NCAA history. And, as you’d expect of someone often described as “winningest,” Knight shared a few thoughts on the topic of winning, including one timeless gem:

“The key is not the will to win… everybody has that. It is the will to prepare to win that is important.”

The will to prepare to win describes the work that takes place long before the game begins. We recognize that will to win in athletes who spend all day on the court or the field or the track or the gym. We quantify that will to win in terms of hours that become days that become weeks, months, and years of practice and preparation. If you want to find athletes that truly want to overcome all the competition, you know where to look: they’ll be hanging out with coaches, trainers, and other driven athletes. The will to prepare to win becomes a culture that attracts its natural citizens.

So where do hang out if you want to win at the SAT & ACT? Would you believe Reddit?

In the ever-evolving world of online forums and social media, Reddit is a leading social news aggregation and discussion site. Often referred to as ‘the front page of the Internet,’ Reddit is organized into countless subreddits covering every topic imaginable… even standardized tests. One brilliant Reddit user and current high schooler Theriley106 explored the community involved in the ACT subreddit by comparing the ACT scores of 2143 flaired users or flairs, meaning commenters who affiliate their usernames with /r/ACT, against those of the entire 2,030,038 students who took the ACT in 2017. The results were astonishing: 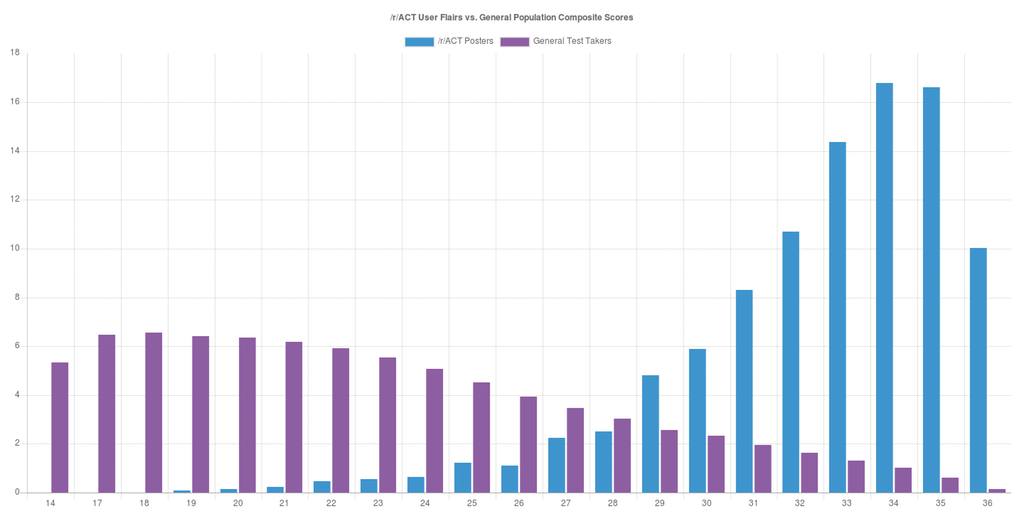 This does not mean that simply visiting /r/ACT will earn you a higher score on the ACT. Simply commenting on the /r/ACT won’t necessarily help either. But, as clearly as this limited dataset can illustrate, those who participate in the ACT subreddit so actively that they identify themselves online with that group go on to earn much, much higher scores than the general population.

The will to prepare to win is as crucial in testing as it is in sports. If you really want to earn seriously strong test scores, you have to walk the walk. Test prep is a culture that you can immerse yourself in. Start with the online SAT and ACT communities on Reddit, ask testing questions on Quora (I may answer it), and explore the test prep forums at College Confidential. These are the gyms and tracks and fields of winning test takers, where a community of curiosity and commitment feed excellence. Put in the work and use coaches as needed, but remember that your best scores start with your will to prepare to win.