Success, both in tests and life, comes one small step at a time. Unfortunately, these increments of achievement can sometimes seem smaller than they really are, which leads us to overlook their impact. Evaluating ACT scores reminds us of how deceiving certain scores can be.

Today, the ACT is taken by more students than the SAT. Yet, amazingly, people still don’t quite understand how to interpret ACT scores. The problem lies in that weird constricted range: SAT section scores span a full 600 points from 200-800 while ACT section and composite scores cover 36 meager scaled score points. Consequently, test takers can see hundreds of points of improvement from one SAT to another (with the right preparation, naturally), but ACT test takers must content themselves with 2 or 3-point score increases. Which one sounds more impressive? 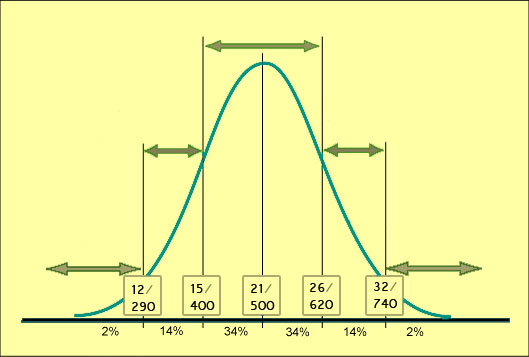 But the ACT scale deceives us, diminishing the accomplishment an improvement of even one point represents. Consider the following:

What does all this mean? The more a student improves on the ACT, the more competition he or she passes:

Obviously, every point on every section of the ACT matters. When you see even small test score gains, think about the amazing accomplishment represented by every single beautiful point!