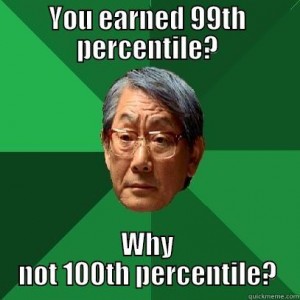 No matter what how the current SAT or ACT is scored, its score scale is arbitrary. Understanding the difference between a 200-800 SAT score and a 1-36 ACT score can drive a person crazy. That’s why percentiles matter so much.

Every SAT and ACT section score is based off a raw score which is then converted to a scaled score based on a larger testing cohort. Any score report will include both scaled scores and percentile ranks. And, really, the only way to understand the value of the former is to consider the latter.

For any given score, your percentile or percentile rank describes what percentage of the testing population you scored higher than. For example, a score in the 70th percentile is higher than 70% of all the scores for that population. When it comes to test scores, the higher the percentile, the better you are doing!

Students prepping for the SAT and ACT can use percentiles in two advanced ways:

1. TO DETERMINE BEST TEST
Since we typically prep students for both the SAT and ACT at the same time, we rely heavily on percentiles to determine whether a student has a statistically significant advantage on one test over the other. If a student earns an 80th percentile SAT score and a 70th percentile ACT score, then we’ll most likely want to capitalize on that more impressive ranking and focus on the SAT. Complicating factors abound of course; all things being equal, though, you play the hot hand and double down on your higher percentile test.

2. TO TRACK PROGRESS
We’re used to tracking SAT progress in tens or even hundreds of points, which can really bolster an impression of success. But understanding the statistical impact of a 2-point ACT increase becomes difficult, and often disappointing, unless percentiles enter the picture.

Now we can evaluate scores using the National Ranks for Test Scores and Composite Score, which are based on ACT-tested high school graduates from 2012, 2013, and 2014.

Imagine how much your college admissions prospects would improve if your test scores helped you jump over almost a half million of the students likely applying to the same schools you are!

Previous articleClass of 2017: Why Should You Take the New SAT?Next article What Does "SAT" Stand For?