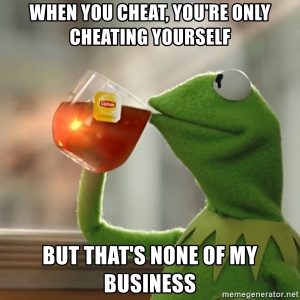 Unless you were raised by dishonorable wolves, you know all too well what all of us learn when we’re young: cheating is wrong. That cold, hard truth applies in every situation, no matter how important the moment may seem. In fact, the most critical inflection points in our lives require the highest levels of integrity, as even minor failings of character can have long-lasting and profound implications.

Given all of this, you might be surprised at the depths to which some people will sink to attain advantage in college admissions. News of a college admissions cheating scandal–complete with celebrities, social media stars, and a catchy FBI codename–has rendered most Americans aghast at the excesses of parental ambition and educational malfeasance. Others may be analyzing this sordid story for different reasons, namely for insight on how to cheat your way into the college of your dreams. Cheating on the SAT and ACT isn’t nearly as easy as it used to be, although test takers willing to travel to Asia have often uncovered unethical advantages on test day. Even that cheating strategy has been losing its luster as College Board and ACT stand ready to cancel a country’s tests at even the hint of a security breach. Cheating on the tests in the United States can certainly be more convenient, but certain very specific steps are required:

Step 1. Find a bad operator known for cheating.
In over 25 years in the test prep industry, I don’t recall ever meeting a professional willing to take a test or write an admissions essay for a student. Most test prep tutors and college counselors hold themselves to an extremely high ethical standard and seek to support the integrity of the admissions process. Every once in a while, though, you may uncover an operator who knows all the strings to pull and has no problem pulling them for a price. A true college admissions criminal understands the intricacies of how proctors are bribed, medical records are falsified, test answers are altered, and admissions decisions are unfairly influenced.

Step 2. Spend a STUPID amount of money.
Money definitely has the potential to influence admissions decisions, but usually only in gaudy amounts. But what recourse is available to cheaters who can’t afford to donate millions of dollars to elite universities? If test scores are the only weakness in a student’s application, you may be able to pay a shady operator (see Step 1) to either test in place of your teen or modify the multiple-choice grid after the fact to achieve a desired score. A professional cheater implicated in the current scandal earned anywhere from $10,000 to $75,000 per student. Not everyone gets off that cheap, though. One celebrity couple allegedly paid $500,000 to fraudulently get their two daughters into USC!

Step 3. Ruin your child’s life.
You’ve probably heard the old chestnut about how cheaters really only cheat themselves. But what about the kids who don’t even know until after the fact that their successes were secured dishonestly? The ringleader of this particular admissions scandal estimates that he personally helped approximately 750 families. Some of those families colluded with him without their children’s knowledge. These teens, whether witting or unwitting accomplices, learned highly caustic lessons:

The teens who knew their parents cheated to improve their admissions prospects learned that cheating is acceptable, especially if you can afford it.

The teens who did not know their parents cheated to improve their admissions prospects learned that they could not be trusted to realize their parents’ dreams for them.

It’s hard to imagine which lesson is more corrosive to a child’s character and self-image. I personally encounter thousands of high schoolers a year who work extremely hard in the pursuit of their undergraduate dreams. These teens often combine the commitment of professional athletes with the productivity skills of CEOs. Every one of them enters the competitive college admissions process knowing that they not only earned every acceptance but that they are well-prepared to succeed at the school they choose to attend. These are the lessons parents should want their children to learn. Buying entrance to a college where a student will most likely struggle sends an entirely different message.

Clearly, cheating on the big entrance exams or in the college admissions process in general is possible. However, it isn’t easy, and it isn’t right. Entrance into some magical dream school does not, contrary to some marketing campaigns, secure a future of success and happiness. Cheating your way into a school, on the other hand, almost always makes success and happiness that much harder to attain. Families with sufficient resources to contemplate highly expensive and unethical efforts to subvert the admissions process should instead invest a fraction of that money into quality preparation and coaching. Spend some of the rest on counseling to understand why you’d want to hurt your child by even considering cheating, and you’ll still have enough left over to cover a big chunk of tuition at whichever school your kid gets into on his or her own merits.