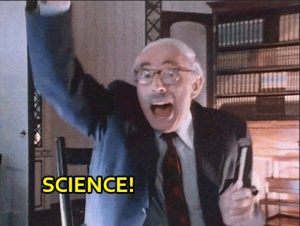 How confused would you be if someone told you that the ACT Reading section didn’t really require reading or that discrete content knowledge of arithmetic, algebra, and geometry was unimportant on the math sections of the SAT? Obviously, the math, reading, and grammar sections of both exams test exactly what you’d expect. The same cannot be said for the ACT Science section.

Obviously, the final multiple-choice section of the ACT has something to do with science. The current version of the exam presents six passages drawn from real concepts in biology, chemistry, physics, and Earth and space science. However–and this is the confusing part–students don’t need to bring much specific content knowledge to the test to do exceedingly well. Weird, right?

The common misconception about what matters in ACT Science probably stems from its name. When you take a science test, you can usually count on being tested on science. However, this section was once more accurately called the Science Reasoning section. These days, the name of the section lacks in clarity what it gained in brevity, as the requisite skills for success remain the same. What does the test maker want students to be able to do to establish competency?

Nowhere does that core list of skills mention detailed knowledge of science, and neither do the Science Reporting Categories:

In fact, ACT Science is not meant to test science per se. According to the ACT Technical Manual, students are assumed to arrive at the test with a minimum of two years of introductory science… “typically one year of biology and one year of physical science and/or Earth science.” While many test takers have already taken chemistry and/or physics along with biology and ESS, only a handful of discrete facts from any of those broad categories may be tested in roughly 1-4 questions per test.

What kind of science knowledge helps on the ACT? The more, the better, obviously, but familiarity with fundamental properties of water, solids, and gases as well as terminology related to solutions and mixtures will make a difference, along with concepts in cell biology and genetics. For physics, students should understand the relationship between pressure, volume and temperature, along with volume and density for different states of matter and processes involving heat and energy transfer. Round that out with knowledge of geologic processes, ecology, and and basic measures of planets, and you’ll be ready for more or all of the handful of real science questions that might appear.

Much more important, though, is science reasoning. True success on this section depends primarily on reading skill, graphical literacy, and understanding of the scientific method. Don’t get caught up in the Krebs cycle or periodic table; ACT Science is all about data interpretation, evaluation, and scientific investigation.