We at Chariot Learning administer a lot of practice tests. Make that a LOT of practice tests, most of them free. That only makes sense, as taking official practice SAT & ACT exams under simulated test conditions is a cornerstone of effective test preparation. Committing so many mornings to proctoring feels worth the effort when we see so many motivated students showing up time after time.

With a self-selected population of test takers at hand, I can’t help but conduct surveys at different testing sites. During our Winter 2018 season, we asked “What motivates you to do better on the SAT or ACT?” For the rest of 2018, we focused on a different question: “How many practice tests do you plan to take before the official exam?”

From March through November at libraries and other testing sites across Rochester and Syracuse, we elicited responses from 303 SAT & ACT test takers. The number of respondents represented a fraction of the total number of students we tested during that period and generally did not include students enrolled in our classes or tutoring. This open-response survey can only be described as unscientific, as all of the students surveyed were already taking a practice test. Nonetheless, the results were, as you’d expect, illuminating. 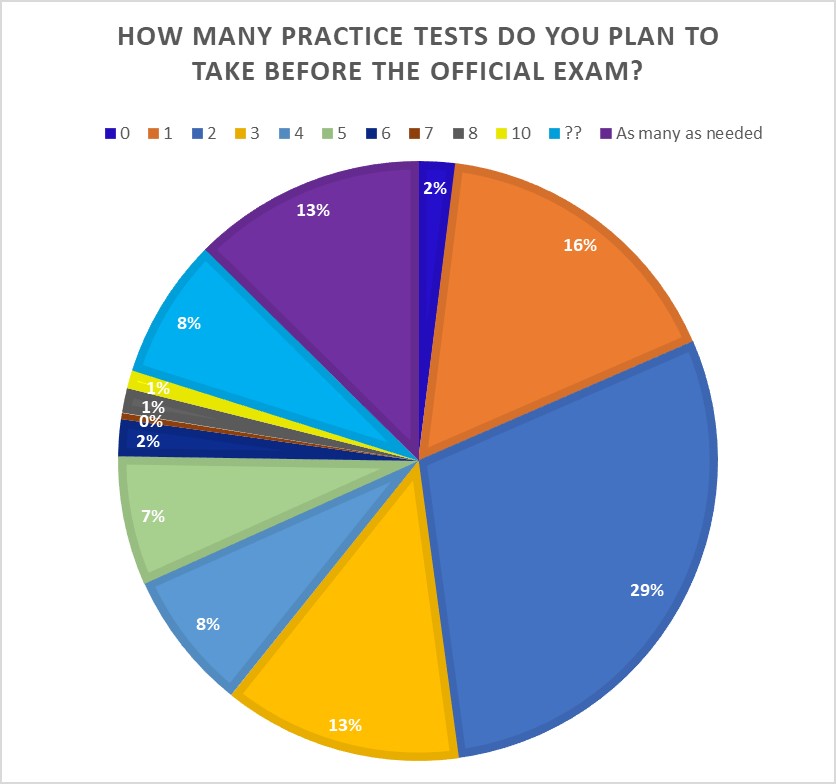 0 – A full 2% of teens responded 0 even though they were already taking a practice test.
1 – The 2nd most popular response, which may or may not have included the test they were already taking. Many of these respondents answered 1 to 2 or something similar.
2 – This was far and away the most popular response, which included 2 to 4, 2 to 4, and related responses.
3 – Many students responded that they would take 3 tests or included 3 in their projected number of practice tests.
4-10 – Fewer than 20% of respondents projected a specific number of practice tests between 4 and 10.
?? – 8% of test takers prudently refrained from guessing how many tests they’d ultimately take.
As many as needed – This catch-all category for 13% of test takers included a wide range of responses. Some teens simply said many, multiple, several, lots, or a lot. Others committed to going the distance:

We had a few wild card responses as well, the most entertaining of which was “I’ve taken over 20 (!?!)” All in all, though, the responses confirmed what I witness every week of the year: many of today’s teens understand how important practice testing is to earning their best test scores and are committed to the process.

Previous articleWhat to Be When You Want to Be SuccessfulNext article Ode to the Big, Pink Eraser