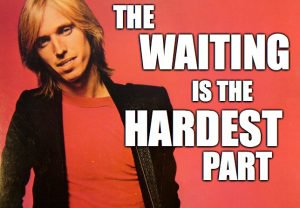 As long as humans have been aware of the passage of time, we’ve hated waiting. English poet Sarah Doudney tapped into this outrage in 1871 when she penned the verse, “But the waiting time, my brothers, is the hardest time of all.” American poet Tom Petty put his own inimitable spin on this sentiment in 1981. Waiting hurts, especially when you’re waiting for your test scores.

In a sense, sitting for a high stakes standardized test like the SAT or ACT ends on a frustrating note. So much time and energy–and no small amount of anxiety–go into preparing (if you do it right) and taking the test. Once time is called on that last section, though, nothing else happens… for weeks. Every test taker goes home empty handed and the waiting game begins.

So, how long should someone expect to wait for test scores to be announced?

College Board does an excellent job of managing expectations for Score Release Dates. The first wave of multiple-choice scores about 13 days after testing, while SAT Essay scores are released a few days after that.

ACT provides the same level of clarity on Score Reporting Dates, though not as much consistency.Test takers may receive their multiple-choice scores within two weeks of national test dates, though sometimes as early as 10 days afterwards. The October date, however, has a much longer reporting period which may make that test unsuitable for Early Action/Early Decision applications:

Scores from the October test date are available within 3-8 weeks, due to equating. Equating procedures ensure that scores reported have a constant meaning across test forms.

Essentially, waiting for multiple-choice SAT or ACT scores doesn’t take long by conventional standards of nerve-wracking waits. In fact, we waited much longer than a couple of weeks in the days before electronic score reporting. While this may come as small comfort, keep in mind that test takers can put that period of anticipation to good use, either by preparing for the next test or worrying about the one they just took. Both options offer certain benefits–particularly the first one–especially if the wait winds up lasting longer than two weeks. For those unfortunate students whose scores arrive later than expected or are held back entirely, the waiting might not be the hardest part.